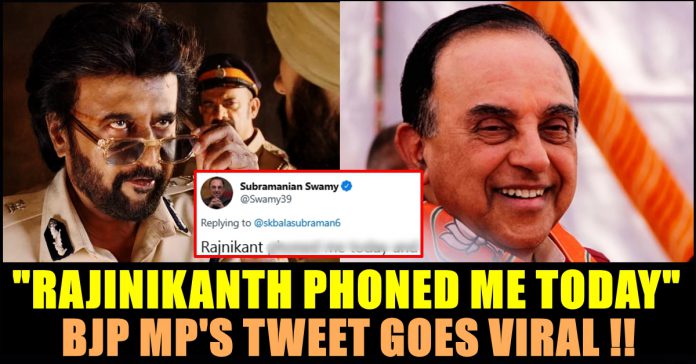 In the press meet, Rajinikanth firmly said that he couldn’t apologize to anyone for his speech in the 50th anniversary function of Thuglak magazine. Now BJP’s MP Subramaniam Swamy has stretched his supportive hand to the Tamil actor and said that he got a call from him in the morning.

At the 50th anniversary event of “Thuglak” magazine, Rajinikanth said that Periyar conducted a protest in 1971, at Salem with naked images of lord Sri Ramachandramoorthy and Sita. “In 1971, Periyar took out a rally against superstition in Salem. In the rally, naked images of Lord Sri Ramachandramoorthy and Sita with sandalwood garland. The incident was covered by no news outlet at that time” said Superstar Rajinikanth who lauded Thuglak which was founded by Cho Ramaswamy for publishing the news in the cover image of their magazine. He said that Thuglak severely criticized Periyar’s activity in that rally.

This speech from him created huge controversy and the supporters of Periyar are demanding an apology from the aspiring politician. “They are asking me to ask apology and to express my regret. I won’t ask apology for my speech and I register it here with politeness.” said Rajinikanth. Meanwhile, to our surprise, BJP’s MP Subramaniam Swamy, through his official twitter account, has expressed his support for the actor. He said that he stands by Rajinikanth for a change.

“For a change I am on the side of Rajnikant on the E. V. R. Naicker 1971 rally issue of parading Ram and Sita in a derogatory. This is a fact and Cho had published it in Thuglak. If the cine actor stays firm I will back him in courts if he wants” read the tweet of Swamy.

For a change I am on the side of Rajnikant on the E. V. R. Naicker 1971 rally issue of parading Ram and Sita in a derogatory. This is a fact and Cho had published it in Thuglak. If the cine actor stays firm I will back him in courts if he wants

Followed by this, Subramaniam Swamy also said that Rajinikanth called him today through phone. While replying to one of his follower, Swamy wrote “Rajnikant phoned me today and I told him that on this matter I will be totally supportive”

Check out his other replies here :

I am on the side of truth and national integrity

: But it required courage for a film star to take such a stand on behalf of Hindus. We have to appreciate that and stand by him against the Dravida Kazhagam threats

When one of a reporter asked about his thoughts on people’s statements who took part in the rally in 1971, Rajinikanth said that they are telling what they saw and he is saying what he read. “We should not keep bringing some matters. This is not an incident that should be denied but an incident that should be forgotten” the “Petta” actor said. (Also Read : Rajinikanth’s Bold Statement Amid “Periyar” Controversy !!)

Comment your views on Subramanian Swamy supporting Superstar Rajinikanth in this controversy !!

Previous articleKS Ravikumar Tried To Get Out Of Simbu’s “Saravana” ?? WATCH
Next articleTamil Fans Disappointed With The Remake Posters Of Asuran !!

Director Venkat Prabhu who is known for making quality movies, recently made direct OTT content "Live Telecast". On the evening of Friday, the filmmaker...

After Archana, one more popular female personality is going to enter the Bigg Boss house as wild card contestant. The news which was doing...