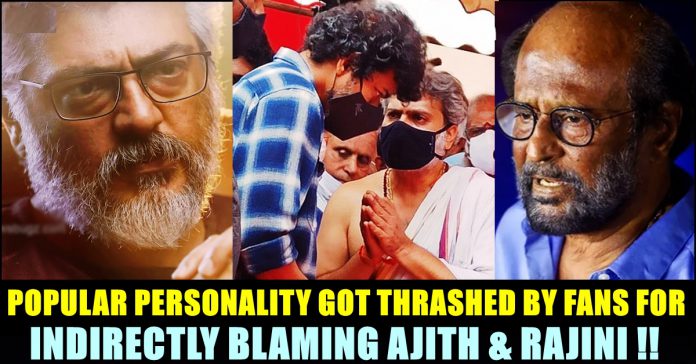 Actor Vijay paid his final respect to late SPB by visiting his funeral in person. The singer’s funeral was held at his Red Hills farm house in Thiruvallur district of Tamil nadu which is 50 KMS far from Chennai. The funeral took place with complete police honours. Vijay visited the place and consoled SP Charan, son of the legendary singer. SPB acted as Vijay’s father in Priyamanavale movie and lent his voice for Vijay in songs such as Oru Kaditham, Enna Azhagu, Azhagooril Poothavale.

Legendary singer SP Balasubramaniam who was getting treatment since August 5 due to the infection COVID 19 virus, died at MGM hospital on Friday noon. Music lovers, SPB fans, cinema stars and several other people who belong to various field shattered on hearing the news. SP Balasubramaniam who was admitted to hospital due to COVID 19 infection, faced setback in the improvement of his health last month. The MGM Healthcare where the singer has been undergoing treatment released a statement saying that the singer is currently critical and has moved to the Intensive care unit. At that time, entire film fraternity prayed for the recovery of him.

The gesture of actor Vijay visiting the funeral irrespective of COVID 19 risk, was being hailed by his fans in social media platforms. Director Venkat Prabhu uploaded a post respecting Vijay.

On seeing this tweet from VP, political analyst, sports anchor and Doctor Sumanth Raman, posted a tweet blaming those who failed to attend the funeral of SPB. He said that those who benefited a lot more from SPB songs than Vijay chose to stay away, taking sly dig at Superstar Rajinikanth and actor Ajith.

When those who benefited a lot more from #SPB songs than @actorvijay chose to stay away this was a heartwarming gesture by Vijay. Respect indeed. 🙏 https://t.co/rYsHGyCgEu

This tweet irked the followers of AJith and Rajinikanth who said that their presence will cause a crowd gathering which will lead to more COVID 19 cases. It is notable that Sumanth himself pointed out people gathering in large number to board a train and expressed his disappointment. One of a fan quoted the tweet and questioned the contradiction between his own statements.

Check out few of the reactions from fans :

Sir, you are a doctor right
You know the pace at which corona is spreading and still you want to downgrade the people who are not visiting, showing the agenda
you could have simply shown respect to vijay but just to grab attention you are adding negative things. You can be better

U need fight between rajini, kamal, ajith and vijay fans right? Unnecessary tweet now. Respect for vijay, but u r such an influencer, please delete this tweet.

What do you mean sir? Create a mass gathering for funeral & spread more COVID19? Didn't expect such tweet from you! Shame!

Stop this petty politics Sumanth. In this pandemic situation, it is best for everyone and also for Shri SPB family for everyone to pray for his soul at their place. So, don’t talk as if you know everything and whatever you saying is right. Stop this comparison of one with another

Comment your views on this statement of Sumanth Raman !!