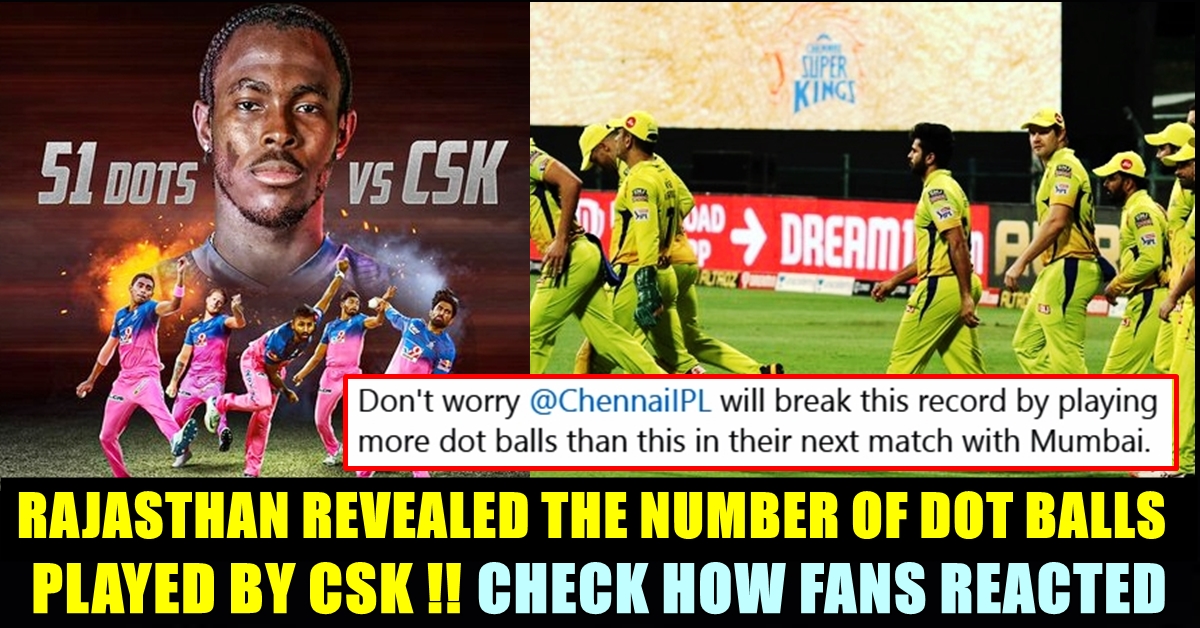 Day after chasing CSK’s total of 126 runs with 3 overs to spare, official twitter handle of Rajasthan Royals came up with a tweet appreciating their bowlers for restricting Chennai Super kings within such a small total. In the post, Rajasthan Royals posted the pictures of their bowlers Archer, Tyagi, Rajpoot, Ben stokes, Gopal, Tiwetiya and appreciated them. In the post’s comment section, fans of CSK tagged the official twitter account of Chennai Super kings and expressed their disappointment by trolling the team for the flaws they committed in the match.

After winning the toss, Chennai Super kings decided to bat. With a mediocre start and poor batting in the middle order, the team managed to score only 125 runs in the 20 overs which is the least by a team in their first innings in IPL 2020. Rajasthan Royals, despite of losing early wickets, chased the total pretty comfortably and pushed Chennai Super Kings to the last spot in the points table.

Generally, teams which are batting first would look to charge from the start to post a big total on the board. Strangely, Team Chennai Super Kings, scored just 126 runs by having 5 wickets in hand at the end of 20 overs. In the 120 balls they faced, the batsmen of CSK team played 51 dot balls which is nearly 9 overs.

Appreciating their bowlers for this achievement, Rajasthan Royals wrote “Drop it like it’s 𝗁̶𝗈̶𝗍̶ dot.” as the caption in their social media post.

This post grabbed the attention of CSK fans who are pretty much active in online platforms for more time comparing to the fans of Rajasthan Royals. They started tagging the official twitter account of Chennai Super Kings and expressed their emotions.

“Don’t worry @ChennaiIPL will break this record by playing more dot balls than this in their next match with Mumbai.” wrote one of a follower whereas another one asked “Why are you counting dot balls in a test match?” in a way of mocking Team CSK.

Don't worry @ChennaiIPL will break this record by playing more dot balls than this in their next match with Mumbai.#IPL2020

Why are you counting dot balls in a test match?

While talking about the loss, Dhoni, in the presentation ceremony, said that Chennai weren’t there in the tournament. “Fair enough, this season we weren’t really there. Also there were few chances to the youngsters. Maybe we didn’t see the kind of spark that they could’ve given us to say okay you know push the experienced guys and make space for them. But what this result has done is give those youngsters whatever is left in our league stages. They will get a chance and have no real pressure on them so they can go out and express themselves. And give us the option of looking at the other options in the batting lineup or where they’d like to bat.” he said.