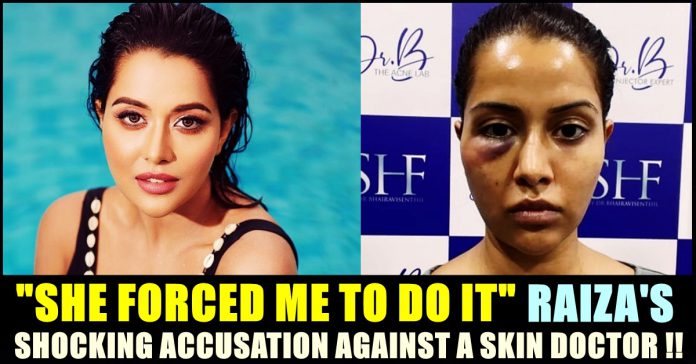 Raiza’s Shocking Accusation Against A Dermatologist !!

Actress Raiza wilson who rose to fame among Tamil audience for her stint in the first season of Bigg Boss show, came up with a shocking accusation against a Dermatologist and has uploaded a picture of herself in which her face could be seen affected by an alleged skin care procedure. The actress tagged an Instagram handle named Dr. Bhairavi Senthil and said that she caused her the trouble by forcing her to go through a procedure that she didn’t need.

Raiza wilson who debuted to Tamil film industry through “Pyar Prema Kaadhal”, is pretty much active in Instagram by uploading the pictures, videos from her photo shoots. She won praise for her matured performance in the romantic-drama Pyaar Prema Kaadhal, in which she acted along with her Bigg Boss housemate Harish Kalyan. She is one of a very few models who made it to big screen through Bigg Boss show.

Being one of the very few interactive female celebrities, Raiza is currently enjoying 1.5 million and 3 lakh plus followers in Instagram and Twitter respectively. The actress has uploaded 1913 posts in photo/video posting social media app so far. On Saturday, the gorgeous actress came up with a shocking Instagram story which left her fans in a shocked state.

Raiza uploaded a picture of herself suffering a deep swell in one of her eyes and said that she visited Dr. Bhairavi Senthil whose Instagram bio says that she is a Dermatologist, CEO, Medical director of Skin health foundation for a simple facial treatment.

The actress said that Dr. Bhairavi Senthil forced her to do a procedure that she didn’t need. Raiza said that the picture she uploaded of herself is the result of the procedure.

Raiza also said that Bhairavi Senthil refused to meet or talk to her today and her updated about her staff’s response. Raiza has been informed that the person who forced her to go through a treatment which she didn’t intend to, left the town.

As soon as Raiza uploaded the story in her official account, it went viral among the users of social media platforms. On the work front, Raiza is all set to appear in Vishnu Vishal’s “FIR” and Yuvan Shankar Raja’s next production venture “Alice”. Trailer of her upcoming film “Chase” released recently in youtube as well.

The Madras High Court restrained the police from arresting AR Murugadoss till 27 November after the director filed a plea seeking anticipatory bail, according to Hindustan...

Rohit Sharma and Virat Kohli are one of the top Indian cricketers and among the best IPL players at this moment. But after some recent...