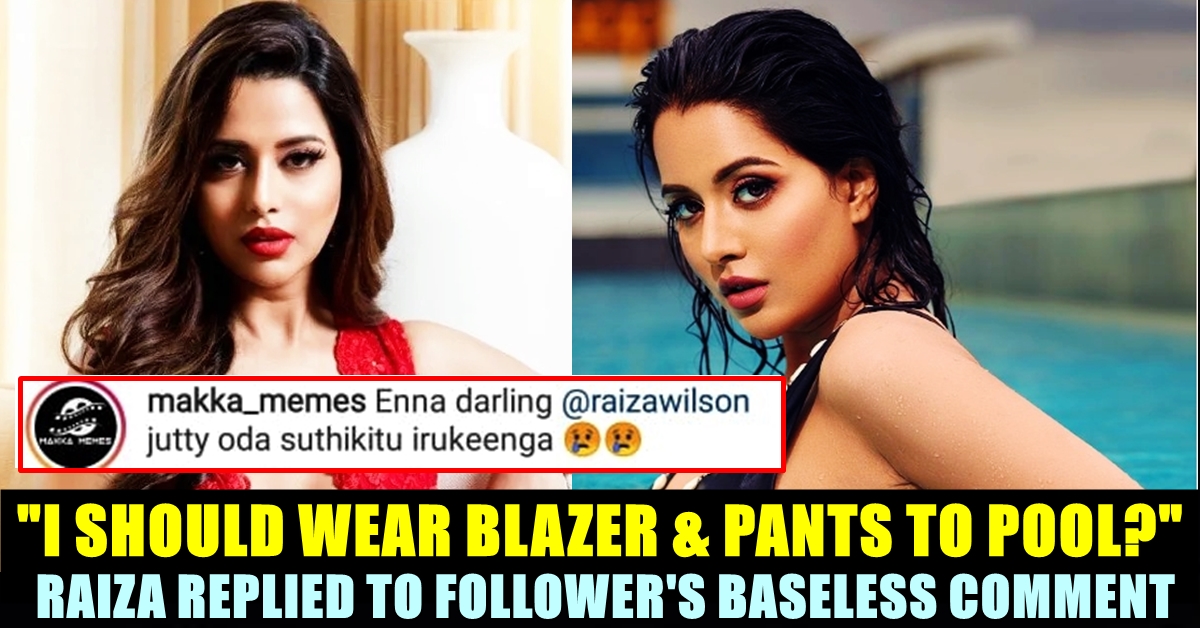 Raiza wilson who rose to fame among Tamil audience through her stint in Bigg Boss season one, is currently busy engaging the followers of her Instagram account. The actress who appeared in Yuvan Shankar Raja’s “Pyar Prema Kaadhal” as a lead actress after coming out of the Bigg Boss house, is expected to feature in a number of other Tamil films teaser, trailers and first looks of which were released in social media platforms lately.

Two days ago, the actress uploaded a video in her Instagram account in which she could be seen entering a swimming pool before boasting her swimming ability by wearing a bikini suite. The video received huge reception from her 1.5 million followers and garnered several kind of comments as well. Among the thousands of comments that surfaced, a follower’s inappropriate comment on the actress’s attire grabbed the attention of the Bigg Boss star and it made her to give a fitting reply as well.

As we all know, social media is definitely not a good place for cinema celebrities, especially for female actresses as they are constantly receiving trolls and abuses in daily basis from their own followers. Many would ignore them but when it exceeds its limits, they would raise voice exposing the harasser to public. Now, actress Raiza chose to troll back a follower who commented on her swim suite.

The actress who has thing for beach, has been uploading posts and videos of herself spending quality time in beaches of various locations. Check out some of her recent posts below :

On seeing this recent video of the young actress, a follower came with a baseless comment on her attire. He asked her why she is roaming around by wearing an underwear. Replying to him, the actress sarcastically whether the commenter is suggesting her to wear a blazer and pants while swimming in a pool. She also suggested him not to become a stylist in the future.

“So according to you I should wear a blazer and pants to the pool ?? Please don’t ever become stylist” read the comment of Raiza Wilson.

Here’s the screen shot of the actress :

Raiza wilson is one of the very few models who made it to big screen through Bigg Boss show. On the work front, the actress is all set to appear in Vishnu Vishal’s “FIR” and Yuvan Shankar Raja’s next production venture “Alice”. Trailer of her upcoming film “Chase” released recently in youtube as well.

“My Family Is Very Orthodox & Traditional” Newly Married Husband Complains About His Wife !!
“No Place For Sasikala, TTV Dhinakaran In ADMK” – Minister Jayakumar !!