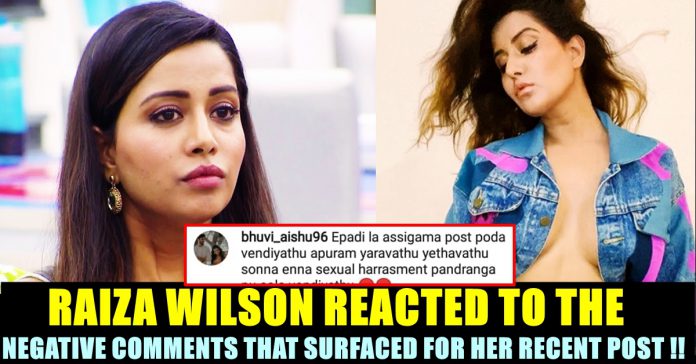 With many trolling through their comments, a number of users said that the actress is trying to get movie opportunities by posting those pictures. Few even moral policed the actress saying that wearing such clothes leads to sexual harassments.

Reacting to such comments, Raiza shared a story uploaded by one of her followers. In the story, the Instagram user condemning the obscene commenters. He who said that he got disappointed on seeing the comments, said that her pictures are way better comparing to the item numbers that are taking place in Tamil films.

“I don’t know what to say to the people who argue that he/she has the right to comment whatever he thinks. Why can’t you people keep your fantasies to yourself ? Why do you want the world to know about it ??” the user said and pointed out a comment which disappointed him the post. Sharing the story in her Instagram profile, Raiza thanked him writing “Wow thanks”

Check out the screen shot of the story below :

Raiza recently went through a tough phase of her life after facing a major skin issue due to a treatment she had in a skin care clinic. She accused the clinic of cheating her by uploading the pictures of her selfies. However, most lately, Raiza shared the pictures of herself flaunting her skin glow in her official social media handles. Many fans and media portals questioned whether she gained her skin back due to the treatment provided by the skin care she accused earlier and few even asked whether she would ask an apology to the clinic for wrongly accusing them. In a way of clearing the air, Raiza uploaded a story in her official Instagram account stating that it was another skin care centre which fixed things for her. Read : Raiza Opened About How She Regained Her Old, Glowing Skin !!

Hashtag "We Don't Want Theri Remake" is trending in the micro blogging social media site after a speculation on director Harish Shankar is going...

Dhanush’s Fitting Reply To Those Who Trolled Him For His Looks!!

Tamil actor Dhanush who became a global star by featuring in the recent Netflix project of Russo Brothers "The Gray Man", is his recent...

AR Murugadoss' Sarkar has set a new benchmark by crossing 13 million plus views in record time. The first teaser was released on Friday. Soon after,...