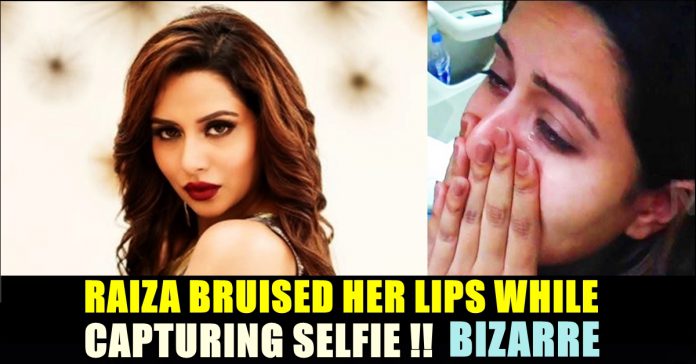 Raiza Wilson Got Hurt In A Bizarre Selfie Accident !!

We have heard advices from our elders regarding the harmness that social media could cause to an individual and about how it will ruin one’s personality. But we would have never expected that it will happen to someone literally. In a way of proving them, Actress and former Bigg Boss contestant Raiza hurted herself while taking a selfie to post it in her social media accounts.

Raiza Wilson became a known personality in Tamil Nadu following her successful stint in the first season of reality show Bigg Boss, hosted by Kamal Haasan. The actress won praise for her matured performance in the romantic-drama Pyaar Prema Kaadhal, in which she acted along with her Bigg Boss housemate Harish Kalyan.

She usually posts her daily routines and pictures of herself in photoshoots in her Instagram and twitter accounts in which she enjoys more than 13 lakh followers. Recently while talking a selfie to post in Internet, Raiza dropped her phone on her face and bruised her lips, according to her posts. However the actress managed to click the selfie successfully which is evident in her twitter and Instagram timeline.

The actress even had the courage to explain the entire incident to her followers. Her post said “It was precisely after this moment that my phone fell flat on my face and I bruised my lip ! #earnyourselfie”

It was precisely after this moment that my phone fell flat on my face and I bruised my lip ! #earnyourselfie

The picture of her bruised lip is going viral across the internet with various reactions. Though it is a minor injury, Many of her fans and followers are worried and advising the actress to be careful whereas general netizens are trolling her hilariously. (Also Read : Raiza Facing Severe Criticism For Dragging Tamilnadu !!)

The actress who was last seen in Harish Kalyan’s Dhanusu Raasi Neyargale in guest appearance is expected to be seen in films like “Alice”, “Kaadhalikka Yarumillai” and “F.I.R”. Raiza Wilson appeared in her first acting role in Tamil film Velaiilla Pattadhari 2 , where she portrayed the personal assistant of Vasundhara Parameshwar, played by Kajol. One of her upcoming project is going to be produced by music director Yuvan Shankar Raja who produced her debut film.

Actor Prashanth, fondly known as Top Star, is 45 years old now. The actor was destined to be a star. He was supposed to...