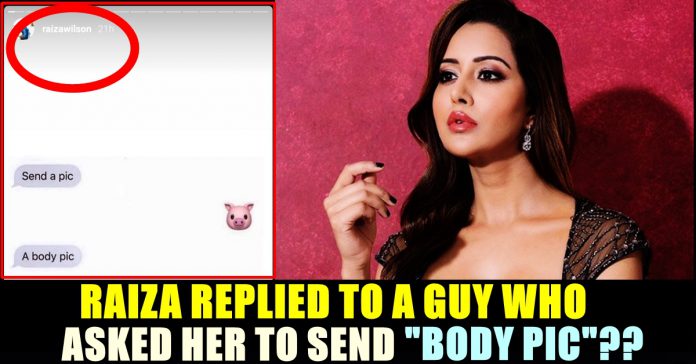 Raiza wilson who is very much interactive with her followers through online platforms, came up with an Instagram story trolling the online harassers. As we all know, social media is definitely not a good place for cinema celebrities, especially for female actresses as they are constantly receiving trolls and abuses in daily basis. Many would ignore them but when it exceeds its limits, they would raise voice exposing the harasser to public.

Raiza who spending most of her quarantine time with her social media followers, became a household name in Tamil Nadu following her successful stint in the first season of reality Television show Bigg Boss, hosted by Kamal Haasan. The actress won praise for her matured performance in the romantic-drama Pyaar Prema Kaadhal, in which she acted along with her Bigg Boss housemate Harish Kalyan. She is one of a very few models who made it to big screen through Bigg Boss show.

Her witty replies and funny posts are garnering wide attention from her followers. Now, a recent Instagram story of the actress showed a screenshot of a conversation in which a boy asks for a “Body Pic”. Not sure whether it was a conversation between Raiza and her follower but the intention behind the story of the Bigg Boss star is to troll the online harassers who are stalking girls in online.

The guy asks for “a pic” through his first message and he receives a face emoji of a pig. He again gives a try by elaborating his message for a “body pic”. For that he receives a emoji of a pig’s body as reply. Check out the screenshot of Raiza’s story below :

“To all the guys sending me photographs of your private parts. STOP! I’m tired of blocking. Also, this one guy. keeps sending me the video of his d**k from different accounts as if it’s God’s greatest gift. Next time, I’ll report you to Cyber crime cell. Also, for all the douchebags sending women such pervert images, know this. It certainly doesn’t result in any other emotion than Disgust” she wrote in her story to shame them.

Comment your views on actresses receiving such harassment from men in online !!