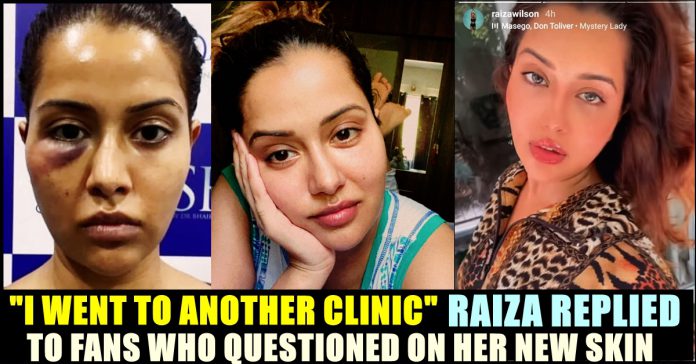 After so many rumours and speculations on the recent pictures uploaded by actress Raiza, the lead lady of “Pyar Prema kadhal” came up with a clarification revealing that she got her skin fixed through another skin care centre and said that it took 5 weeks for her to regain her old face. In the past weeks, the actress had called out a dermatologist named Dr. Bhairavi Senthil for causing intense swell in the face. Pictures shared by Raiza against Bhairavi Senthil went viral across social media platforms and the latter issued a clarification by conducting a press meet as well.

Most lately, Raiza shared a selfie of herself flaunting her skin glow in her official social media handles. Many fans and media portals questioned whether she gained her skin back due to the treatment provided by Bhairavi Senthil and few even asked whether she would ask an apology to her. for wrongly accusing her. Now, in a way of clearing the air, Raiza uploaded a story in her official Instagram account stating that it was another skin care centre which fixed things for her.

Followed by the accusation made by Tamil actress Raiza, Dr. Bhairavi Senthil who treated her through her Skin health foundation released a press note saying that Raiza had no complaints after undergoing the same treatment in previous occasions. She who dubbed the bruises as “minor side effects”, said that it will heal naturally within few days and added that it won’t cause damages to the skin.

She also demanded and apology from the actress and accused her of causing defame, mental agony to her clinic and herself respectively. However, the actress accused the doctor of extorting money from innocent people through false advertisement and promotion. The actress also updated about the legal action she initiated against Dr. Bhairavi Senthil and claimed Rs. 1 crore from her for the deficiency in her service.

The post going to garner 15k likes in no time with various kind of reactions. To those who asked inquired about regaining her skin back and about asking apology to Bhairavi Senthil, Raiza explained writing “To everyone sending me good wishes , Thank you so much, I love you so so so
much. So after my previous scary experience I went to @charissma beauty_clinic and they helped me dissolve all the unnecessary products in my face and gave me appropriate skin advise. It took me 5 weeks to heal completely And I finally feel like myself again. Love you guys” in her story by uploading a selife picture of herself.

Raiza wilson who rose to fame among Tamil audience through her stint in Bigg Boss season one, is currently busy engaging the followers of her social media accounts. The actress who appeared in Yuvan Shankar Raja’s “Pyar Prema Kaadhal” as a lead actress after coming out of the Bigg Boss house, is expected to feature in a number of other Tamil films teaser, trailers and first looks of which were released lately.

Raiza wilson is one of the very few models who made it to big screen through Bigg Boss show. On the work front, the actress is all set to appear in Vishnu Vishal’s “FIR” and Yuvan Shankar Raja’s next production venture “Alice”. Trailer of her upcoming film “Chase” released recently in youtube as well.

Previous articleH.Raja’s Controversial Statement About The Demise Of Sivakarthikeyan’s Father Shocked Fans !!
Next article“Can You Get The Vaccine 8-12 Weeks After You Die ??” – Actor Siddharth