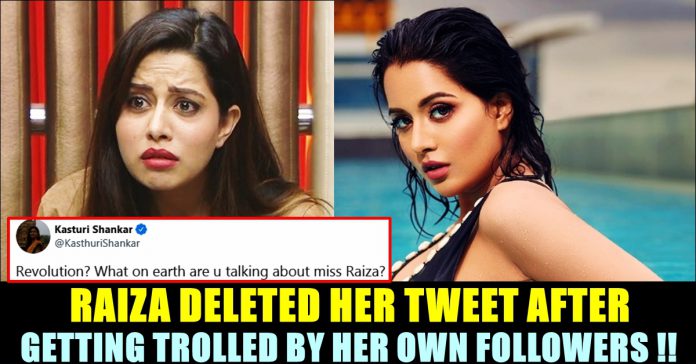 Former Bigg Boss star Raiza who debuted as a heroine through Yuvan Shankar Raja’s “Pyar Prema Kaadhal”, deleted her tweet about Anushka Sharma holding her new born baby after seeing the comments the post received. The actress, on seeing the picture of Bollywood actress Anushka Sharma carrying her baby, said that Anushka revolutionised a whole section of our country or may be the world. Many of her followers couldn’t find what’s revolutionary about the picture and started questioning the actress which probably made her to delete the tweet.

Raiza wilson who rose to fame among Tamil audience through her stint in Bigg Boss season one, is currently busy engaging the followers of her Instagram account by uploading the pictures from her photoshoots. She who is pretty much interactive with her followers, is currently enjoying 1.5 million and 3 lakh plus followers in Instagram and Twitter respectively.

Most recently, Raiza came up with a twitter post heaping praise for Bollywood actress Anushka Sharma. Adding the “heart in eyes” emoji, Raiza tagged the official twitter handle of Anushka Sharma and said that she is making revolution. “Anushka Sharma just revolutionised a whole section of our country/ may be the world. Wow” her caption for the post which had Indian captain Virat Kohli managing the luggage bags said.

She also made a similar statement in her Instagram story which said “Such a beautiful professional and personal life balance. There was a time when wives weren’t allowed to visit cricketers during matches ! And look how far we come #Virushkaslays”

These posts of the actress made netizens to question what’s so revolutionary about Anushka carrying her own baby. They also stated that wives were allowed to visit cricketers during cricket matches since very long time.

“Revolution? What on earth are u talking about miss Raiza? Why such adulation over two parents doing everyday things? It may be a paid promotion, still this is not the way to do it. @raizawilson pl explain” wrote Bigg Boss 3 contestant Kasthuri Shankar whereas a twitter said said “May be in Raiza’s world, mother’s don’t carry babies I guess.. they have their nanny na..”

Revolution? What on earth are u talking about miss Raiza? Why such adulation over two parents doing everyday things?
It may be a paid promotion, still this is not the way to do it. @raizawilson pl explain. https://t.co/kJzrDH4wGM

May be in Raiza's world, mother's don't carry babies I guess.. they have their nanny na..

Raiza you speak as dumb as you look, I’ve never got the intelligent vibes from you, what’s so great about a mother holding her own daughter?

This tweet proves a point that Raiza lives in bubble where she is oblivious of the fact that this act of carrying a baby is being done by mother's for since eternity. I am sure even Anushka will not consider this as revolutionary.

Raiza , has your mom never took you in your arms ? Or your daddy never tackled the hussle of luggage while traveling ??

Seriously! On what world these blue ticks live ? They must spend couple of hours in bus stand and railway station! #ಕೂಪಮಂಡುಕ pic.twitter.com/0eCHkr6xga

"Revolution"
How Raiza sees Virat in this pic… pic.twitter.com/v9mZxEJD3Z

the show of intellectual capacity of Raiza! Amazing! so much of adulation for a hypocrite!

These kind of comments from the users of the micro blogging social media site made the actress to deleted her tweet permanently. However, a reply she made to a user who supported her tweet is still hanging in her twitter timeline.

Previous articleSerial Actress Neha Replied To Rubbish Comments After Her Mother Gave Birth To A Baby Girl !!
Next articleVivekh’s Reply To A Fan After Wishing Vijay Sethupathi Wins Hearts !!