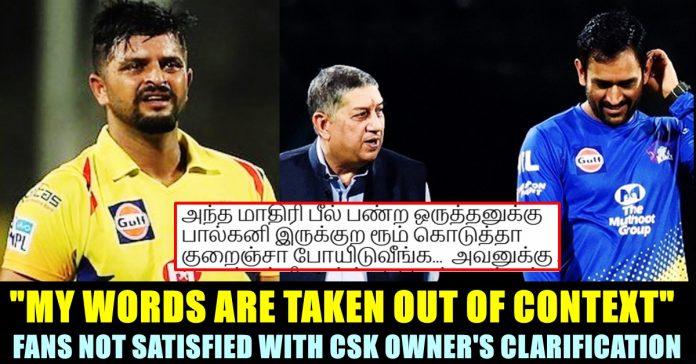 After his interview to Outlook India created huge outrage in social media, CSK owner N Srinivasan has made a clarification saying that his words are taken “out of context”. However, fans of the cricketer and the Chennai Super Kings are not happy which is evident through their comments in the post of the official team’s twitter handle.

“Cricketers are like prima donnas (a very temperamental person with an inflated view of their own talent or importance), like the actors of olden days. Chennai Super Kings have always been like family and all senior players have learnt to co-exist” said Srinivasan, owner of CSK and former BCCI president, according to Outlook India. “CSK was quickly trying to get over the Raina episode” he added in that interview.

“My thinking is that if you are reluctant or not happy, go back. I don’t force anyone to do anything. Sometimes success gets into your head” the CSK owner said earlier according to Outlook. Now, the 75 year old former BCCI president have made a clarification for that interview. Read : “Success Got Into His Head” CSK Owner Srinivasan About Raina !!

“These boys, They are family. They have been family for over a decade now. When I said cricketers are like “Prima donnas” , it wasn’t in a negative sense. A prima donna has is the lead singer in an opera. Similarly, cricketers are always at the forefront of an exercise like this,” said N Srinivasan who underlined that it was unfortunate that he had been quoted out of context.

“Raina’s contribution to the Chennai Super Kings franchise is second to none and it is unfortunate that people are trying to put two and two together to drive a wedge” he said. “His contribution to CSK is phenomenal through the years” he added. “It is important to understand what Suresh is going through right and give him space” N Srinivasan said to The Times Of India.

“The franchise will always stand by him and he has our complete support during this time of distress” he further told TOI. The earlier report has said that Raina was unhappy since the day Chennai Super Kings landed in Dubai on August 21. The 33 year old cricketer was finding the stiff protocols of the bio-bubble claustrophobic and demanded a similar room that was Dhoni facilitated with.

N Srinivasan who believed that IPL is one among the world’s biggest sporting properties, said “We need to preserve it in all its glory and work towards making it bigger and better”.

“Everybody should come together and work towards a successful IPL. It can only happen when all stakeholders share the same vision. “I can see that happening already and it’s a great feeling to see the 13th edition taking shape” he added.

As soon as the statements of the CSK owner surfaced in the official twitter account of Chennai Super Kings, fans started reacting to it in various ways. Checkout some of the reactions below :

What about his statement regarding ?
* Rift btw room
* Success has gone into his Head
* 12 Crores Salary
& What not?
Damage has been done already! Now covering up the same?

Yesterday something else and today “My Comment taking out of context”

He has talked worst about #Raina

Srinivasan should Clarify about “Success gets into head”
These are the most degradable statements said by Srinivasan🖕🏿
No matter we are here to support @ImRaina @ChennaiIPL pic.twitter.com/RsBXWxpUpG

Comment your views on this clarification of CSK owner and former BCCI president Srinivasan !!