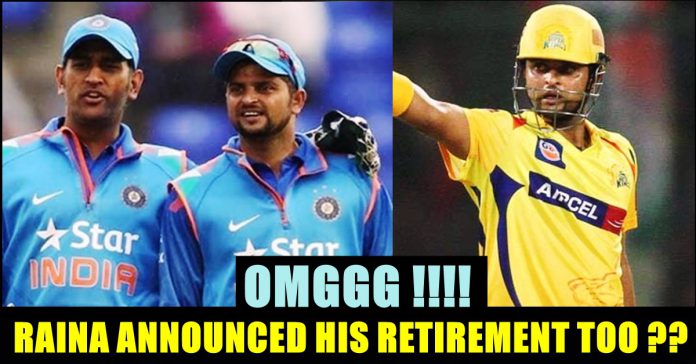 Chinna Thala joins Thala in announcing his retirement. Was an emotional moment today at the office for all or us in Chennai. Had a lengthy conversation with both. Thank you. One thing I can assure you, both will play for CSK for the next few years. #RainaRetires pic.twitter.com/bc5Qu3JdIj

Suresh Raina played for Indian team, a very long time ago. Being a left hand middle order batsman, Raina enjoys a massive fan following in India despite of his absence in the national team. Fondly called as “Chinna Thala” by Tamilnadu fans, Raina represents Chennai Super Kings in Indian Premier League and even captained the team occasionally.

Apart from his aggressive batting, Raina is known for his terrific fielding efforts and considered as one of the best fielders in the world till date. He plays for Uttar Pradesh in all forms of domestic cricket. He was the captain of the Gujarat Lions in the Indian Premier League, and is the vice-captain of the Chennai Super Kings.

The cricketer recently underwent a knee surgery in Amsterdam, the Netherlands which is keeping him out for most of India’s domestic and International matches. The 33-year-old batsman has been going through pain in his knee and decided to undergo surgery. The knee surgery was successful and the cricketer was seen net practicing.

Sharing a picture from the Chennai Super Kings camp, the cricketer wrote “It was nothing but lovely playing with you, @mahi7781 . With my heart full of pride, I choose to join you in this journey. Thank you India. Jai Hind!” in his retirement post.

It was nothing but lovely playing with you, @mahi7781 . With my heart full of pride, I choose to join you in this journey. Thank you India. Jai Hind! 🇮🇳

Not very long time ago, MS Dhoni added a video of his retirement announcement by writing “Thanks. Thanks a lot for ur love and support throughout.from 1929 hrs consider me as Retired”

Earlier Raina uploaded a picture of himself with MS Dhoni to wish his followers for Independence day hinting about their decision.

Happy Independence Day 🇮🇳 Let's celebrate the freedom & salute our freedom fighters who are still fighting to protect us. Can't thank you enough for your patriotism & all the sacrifices you make. Prosperity, happiness and health to all! सारे जहां से अच्छा हिंदुस्तान हमारा 🕊 जय हिंद जय भारत 🙏

More than being an actor and director, Raghava Lawrence is known as an ardent fan of Superstar Rajinikanth. His recent speech in Darbar audio...