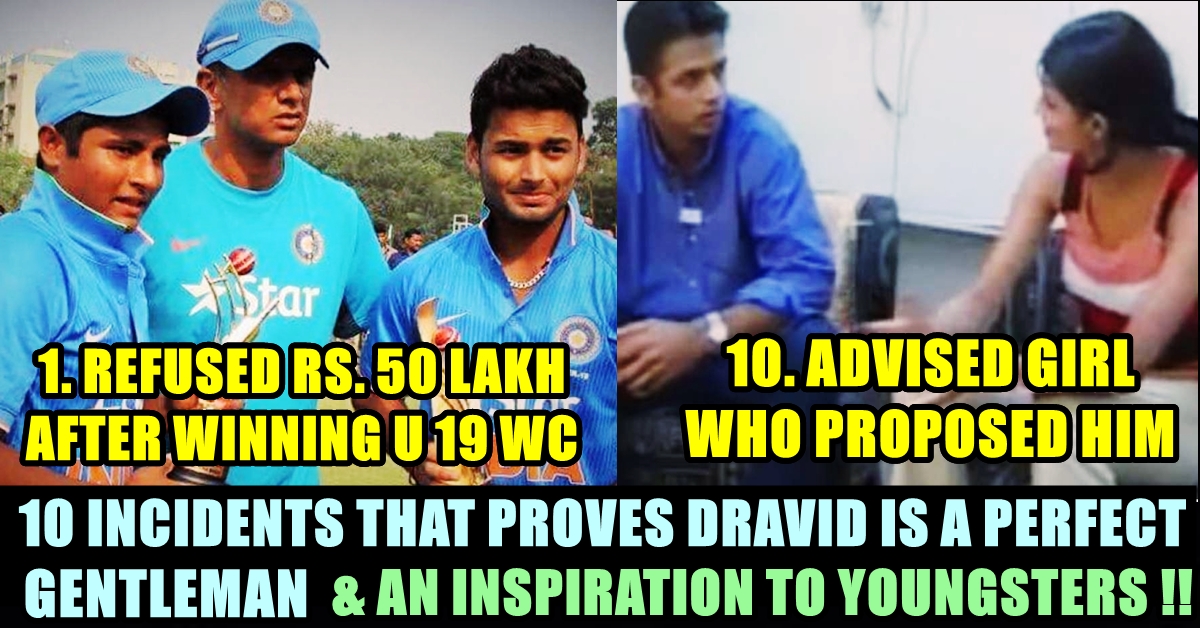 Rahul Dravid might be facing the heat currently due to team India’s performance at the T20 world Cup tournament but no one can deby that he is a role model personality for many emerging cricketers. As a batsman, he played with so much of passion, persistence, composition, concentration and endurance throughout his career. However, the huge fan following Dravid enjoys doesn’t limits to his personal life but also the way the cricketer led his personal life.

From Schooling a journalist who proposed him on air to waiting in queue with public and travelling in public transport, the man taught so much to the youngsters of current generations. Let’s look at some of the notable “Dravid moments” in the piece.

Rahul Dravid grabbed the headlines after he refused to receive Rs.50 lakh as bonus after his Under-19 team’s world cup win. He felt that all the members who did their part for the team should be treated equally. The Board of control for cricket in India accepted his suggestion and paid all squad members Rs. 25 lakh each. Dravid coached the 2018 U-19 Indian team which won the world cup by beating Australia in the finals.

In 2017, a picture of Dravid waiting in a queue went viral across social media platforms. In the image, Dravid could be seen standing in a queue at a science exhibition with his kids and people can’t stop praising the former Indian skipper for not breaching the norms by using his fame.

That’s Rahul Dravid in a queue with his kids at a science exibhition.
No show off;
no page 3 attitude;
no celebrity airs;
no “do you know who I am?” looks;
Queueing just like any other normal parent… really admirable… pic.twitter.com/NFYMuDqubE

3. Made a Cancer Patient Happy

Once Rahul Dravid made a wish of a cancer patient come true. Taking the time out from his schedule, Dravid chatted with Ashok Dhoke, one of his ardent fans who is terminally ill with blood cancer. He communicated with him over Skype and apologised for not being able to make it in person.

Rahul Dravid politely refused to receive an honorary degree that was provided to him by Bangalore university. “He has conveyed that he would try to earn a doctorate degree by accomplishing some form of academic research in the field of sport rather than receiving an honorary degree.” the press release said.

Despite having expensive cars, Rahul Dravid is usually seen taking public transport to commute in Bengaluru, according to sources. Once, he also travelled from Ahmedabad to Bangalore in economic class. When fans gathered to get autographs from him, the cricketer asked them to make way for the public and met them later.

6. Met Fans After His Father’s Demise

A number of fans who admire Dravid, travelled thousands of kilometres just to meet him in person. After reaching, they came to know that the cricketer had lost his father just the day before. To their surprise, Dravid received them well and fulfilled their wish of taking pictures with him.

The cricketing world knows about the rivalry between India and Pakistan. In a way of spreading love across the border, Dravid posed for a selfie with Pakistani player Mohammed Hafeez and the selfie went viral across both the countries.

It is reported that Dravid, once, in a restaurant, went to the counter to make his order, paid cash and came back to seat to enjoy the meal with his family members as he felt uncomfortable to bother the waiters.

After making a huge contribution to team India, Rahul Dravid decided to take things a step forward and help the country perform at a better platform like Olympics. He joined GoSports foundation to help the Junior Olympic Athletes and Paralympic Athletes by nurturing and mentoring them.

Rahul Dravid has been a gentleman on and off the field. He is often regarded as one of the best to have donned the Indian jersey. Check out an old video of Dravid presenting himself with composure and respect and not letting his guard down while being ‘proposed’ by a woman fan. After knowing that she is a 20 year old girl, Dravid advised her to concentrate on studies.

Tim Paine’s Attitude Towards Ashwin Left Him In Big Trouble !! WATCH
“Talk About Anything, He Will Have A Solution For That”- Lokesh Heaps Praise On Kamal Haasan