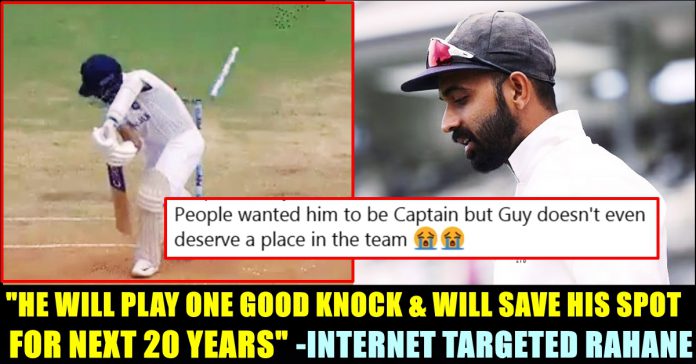 India lost the first test match against England that took place in the Chepauk stadium of Chennai. The poor display of batting performance from the recognised batsmen of team India costed them the match. This is the first defeat of team India in Chepauk ground since 1999. As soon as India lost the match, hashtag “Rahane” is trending in the micro blogging social media site with tweets slamming the vice captain for his poor shot selection under Kohli’s captaincy.

In a reply to England’s 420 run target, India managed to score only 192 runs which includes Gill’s half century and Kohli’s 72. Having lost Rohit Sharma before the close of play on Day 4, India made a poor start on the final day. Cheteshwar Pujara lost his wicket to a brilliant delivery from Jack Leach after scoring only 15 runs. Opener Shubman Gill built a small partnership with captain Kohli, but was dismissed after reaching his half-century. The rest of India’s batsmen including the likes of Rishabh Pant and Washington Sundar were sent back to the hut cheaply, leaving Kohli to fight a lone battle.

Jimmy Anderson to Gill & Rahane on a 5th Day Wicket in Chennai. This is filthy reverse swing.💯 This whole English Team though – Skills & Seasoning. India needs spin. King Kohli might be returning to form as well. #INDvENG

After Ashwin, Kohli also got out in a delivery bowled by Ben stokes after which team India’s batting lasted only minutes. As soon as India registered their loss against England, hashtag “Rahane” is trending. The tweets under the hashtag showed memes and trolls against the vice captain who helped team India to win the test series against Australia in their home. The right hand batsman scored 1 run in the first innings and 0 in the secind which made netizens to troll him.

Meanwhile, a set of fans are demanding Indian team management to make him captain as well. They are pointing out the Kohli’s performance in the last few test matches. Check out some of the reactions that involves Rahane below :

Main difference between Virat Kohli and Ajinkya Rahane is Virat carries the team while the team carries Rahane!

Rahane's contribution in this match is he didn't run out Kohli. #INDvENG

Everyone talked about Prithvi Shaw's Bat-Pad gap and Front foot halfway in air. But it's time to talk about Rahane's same flaws? I ever so slightly feel , YES. #INDvENG

Just Another Failure for Rahane
It will be not talked about cos he has no tattoos, no attitude, simple hairstyle, no lda lsun
People wanted him to be Captain but Guy doesn't even deserve a place in the team 😭😭#INDvENG

Rahane again failed but no one will talk about it because good boy image , no attitude and he will play one good knock in whole series and will save his test spot for next 20 years .

Ajinkya Rahane had so much space between his bat and pad when he got out, a typical Mumbaikar could live there.

However, a report had surfaced saying that Kohli backing Rahane despite of his poor batting effort. “Ajinkya Rahane has stood up and scored when it mattered the most, and let’s not forget the 100 at Melbourne. There are no issues, everyone is playing well.” Virat Kohli reportedly said.

Previous articleJofra Archer’s Old Tweet About Ashwin Is Trending Now !!
Next article“Receipts For Waive Off Will Be Handed Over To Farmers In 15 Days” – TN CM On Agriculture Debts