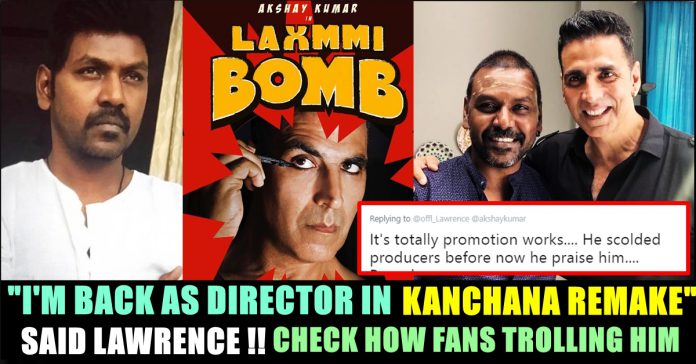 Nearly a couple of weeks ago, Raghava Lawrence, the director and actor of the Muni series seemed to be dejected by the behaviour of the Bollywood crew who are the part of Kanchana’s remake Laxmi Bomb. The director publicly announced that he is walking out of the project through his official twitter account. 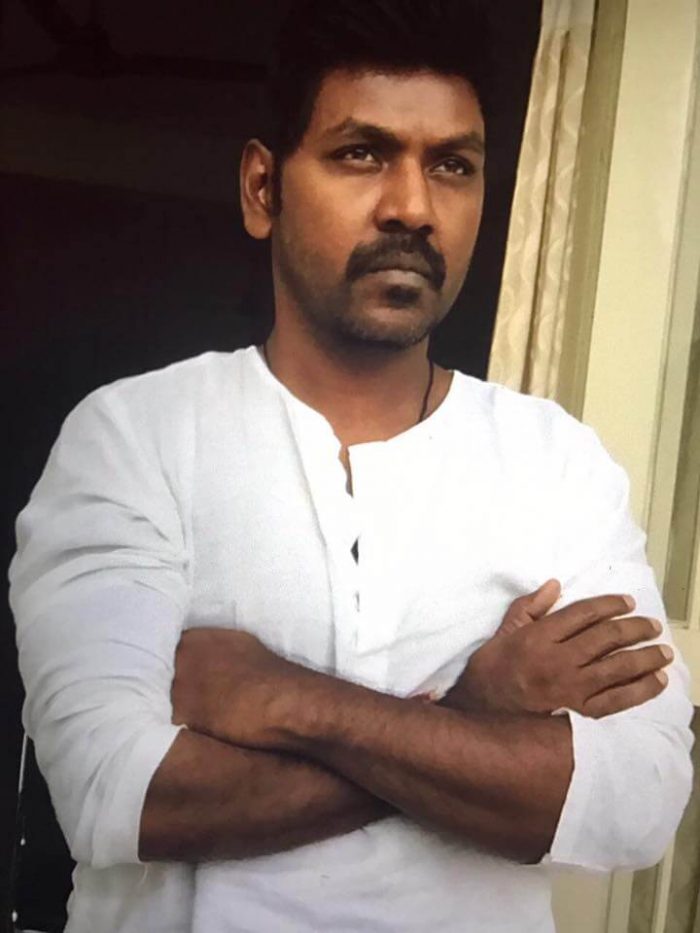 His press release said that they made him feel disrespected and disappointed by releasing the first look of the movie without informing it to him. Check out his press statement here : 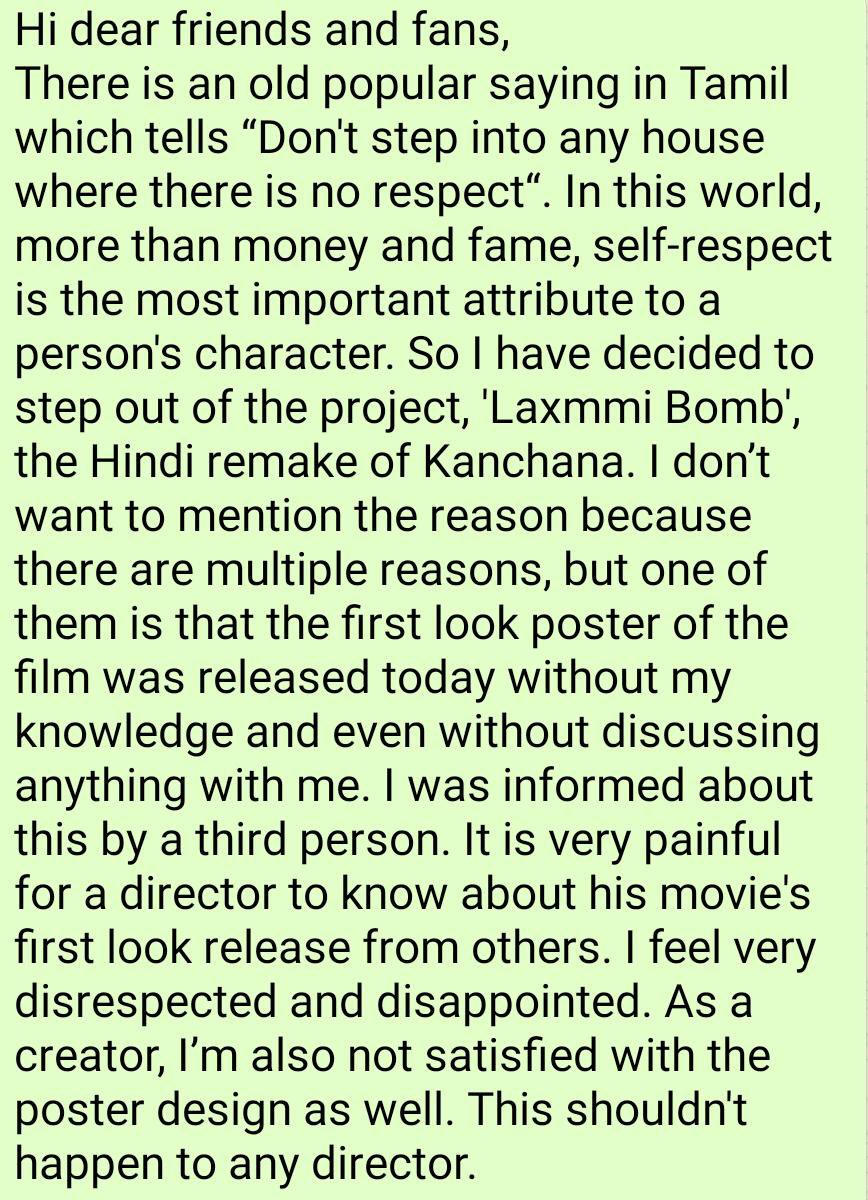 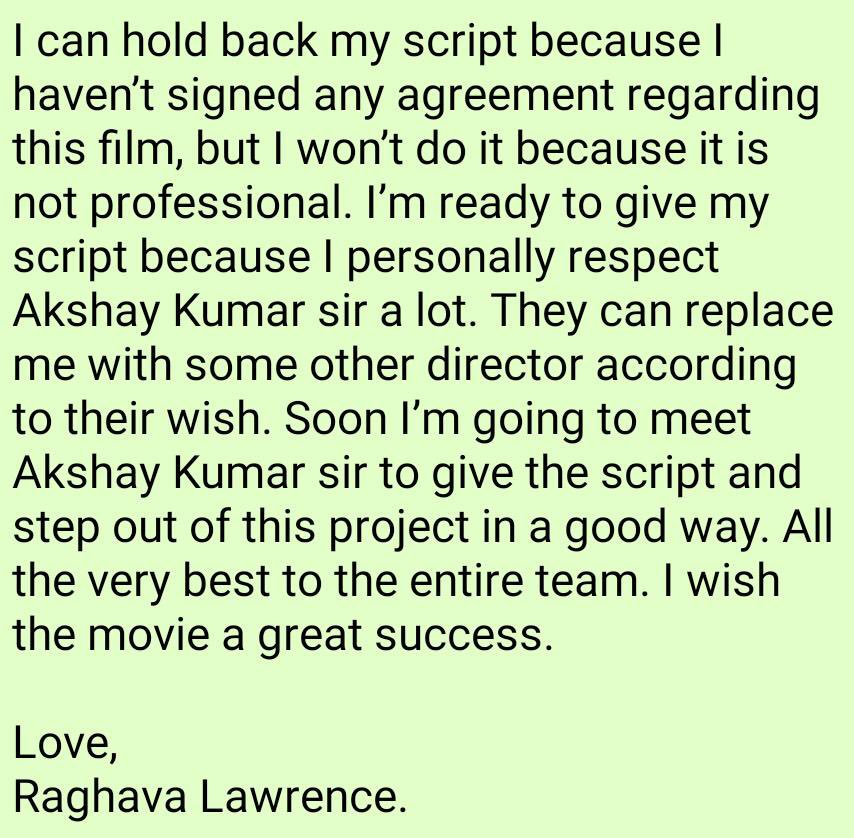 Dear Friends and Fans..!I
In this world, more than money and fame, self-respect is the most important attribute to a person’s character. So I have decided to step out of the project, #Laxmmibomb Hindi remake of Kanchana@akshaykumar
@RowdyGabbar @Advani_Kiara pic.twitter.com/MXSmY4uOgR

Yesterday, Lawrence took to twitter to announce that he’s back on board as director of ‘Laxmmi Bomb’, a remake of his own Tamil blockbuster ‘Kanchana’.

“I am back on board as a director of ‘Laxmmi Bomb’. A big thank you to Akshay Kumar sir to understand my feelings and sorting all issues. Another thank you to my producer Shabinaa Khan for the same. Thanks to both for giving me respect,” Lawrence said. 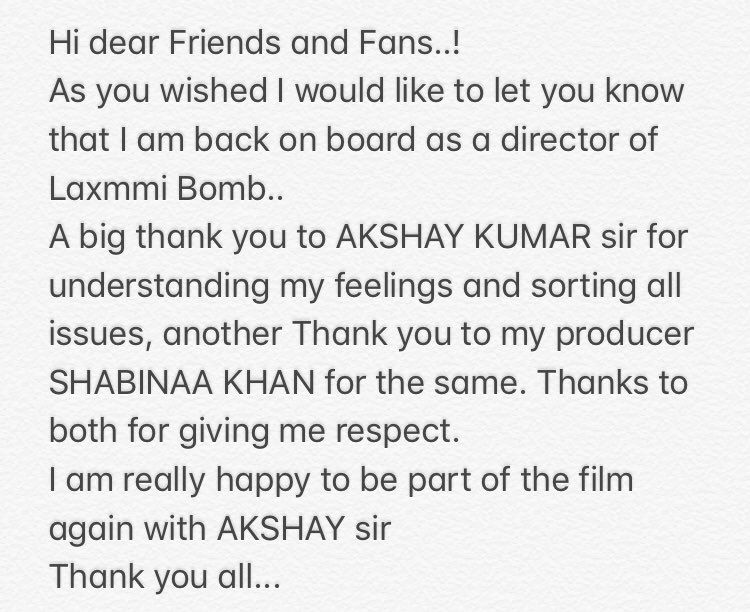 Hi Dear Friends and Fans…!
As you wished I would like to let you know that I am back on board as a director of #LaxmmiBomb with @akshaykumar pic.twitter.com/9HRHF5y2VV

He added that he’s really happy to be part of the project again. After seeing this tweet many of his followers posted negative comments by saying that it is a publicity stunt by Raghava Lawrence. One of the user also asked the actor/producer/dancer to discuss with the producer and actor before making an announcement public.

It’s totally promotion works…. He scolded producers before now he praise him…. Pogada…

Before taking decisions please talk to your Hero & Producers , rather than Just walking out & then joining back

Very poor publiciy stunt..it doesn’t suit you as you are already a blockbuster Director..

publicity mannan ragava lawrence is back

As announced during the time of poster release, Laxmmi Bomb is set to hit theaters on June 5, 2020.

Bringing you one bomb of a story,#LaxmmiBomb starring @Advani_Kiara & yours truly!Bursting in cinemas on 5th June,2020💥
Fox Star Studios Presents
A Cape of Good Films Production in association with Shabinaa Entertainment & Tusshar Entertainment House
Directed by Raghava Lawrence pic.twitter.com/vlXyK4HkNE

According to a report in Mumbai Mirror, the film went on floors in April when Akshay and Kiara Advani, who is the female lead in the film, filmed a song, Bismilla, along with a few scenes