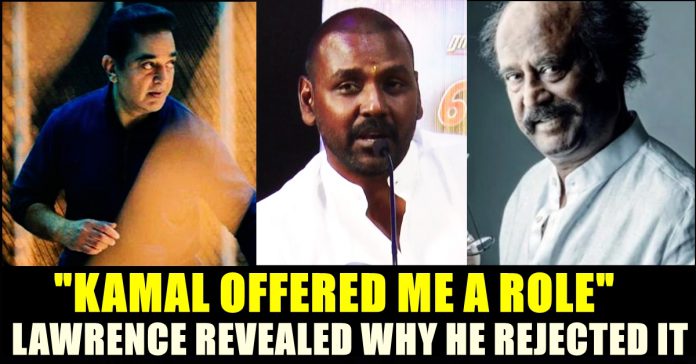 Director, Actor and Dance choreographer Raghava Lawrence came up with a clarification regarding his Darbar audio launch speech to calm the fans of actor and politician Kamal Haasan. Darbar audio launch took place at Nehru stadium, Chennai recently. The show was hosted by the makers of the film which includes Superstar Rajinikanth, Director A.R Murugadoss and Music composer Anirudh Ravichander. Dancer, Director, Actor Raghava Lawrence who is an ardent fan of the actor Rajinikanth also made his presence in the audio launch.

The “Muni” actor’s fiery speech in the audio launch to praise his idol Rajinikanth became a subject to severe hatred. To prove himself as a biggest fan of Superstar Rajinikanth, Lawrence said that he destroyed the posters of actor Kamal haasan during his childhood. He said that the vandalised the posters of Kamal Haasan by throwing cow dung on it when he was a child. “Earlier everything was different. Now when I see Rajinikanth and Kamal Haasan together, being very close, I feel something good is going to happen” he said.

This speech of the actor made severe outrage which made everyone to spread hate messages against him. Few even compared how celebrities praised Kamal Haasan in the function of Kamal 60 with Lawrence’s speech to praise Rajinikanth. Now, in a way of giving clarification to his audio launch speech, Lawrence said that his speech was intended on someone else but it was misunderstood by the masses.

Check out the video of his speech here :

In his speech he said that the fans of Kamal Haasan are like his brothers. ” In Darbar audio launch, my intention was to talk about someone else. In my childhood, during when I can’t understand thing properly, I threw cow dung at Kamal Sir’s poster. That is an age where I couldn’t understand anything. Now after seeing their friendship, I regret my deeds.” said Lawrence who added that there is no single misunderstanding took place between himself and Kamal Haasan.

I raised how Thalaivar wanted me to raise. I respect Kamal sir and my speech was intended to glorify him. If you are still not happy with my clarification, you can come to my place and do whatever you want.” said Lawrence in his speech. In his speech he informed us that Kamal Haasan offered him a role in his upcoming film which he couldn’t do due to date issues he has with “Kaala Bhairavaa”.

This speech of Lawrence made the fans of Kamal Haasan clear that the actor was intended to attack Naam Tamizhar leader Seeman through his speech. They even stooped posting tweets against the actor in social media platforms after his clarification.

What do you think on this clarification of Lawrence ?? Comment your views below !!

Previous articleProducer Expressed His Disappointment On Tamil Heroes !! WATCH !!
Next articleActress Blamed Kavin For Flirting With Losliya After All These Days !!

A written FIR has been lodged against Salman Khan at DN Nagar Police Station, Mumbai on Wednesday evening. Bollywood actor Salman Khan landed in yet...

Ravichandran Ashwin Got Extremely Irritated On Seeing Ajith, Vijay Fans Fight !! Check What He Has To Say !!