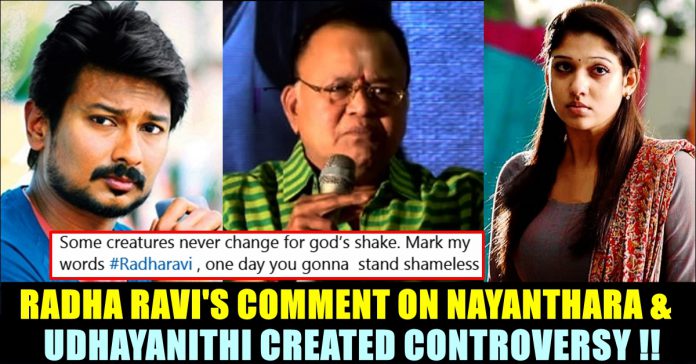 Senior actor Radha ravi who is currently representing BJP party, once again made a derogatory comment against actress Nayanthara. He was expelled from DMK party after making a mean comment against the “Mookuthu Amman” actress in one of her movie launches. Now, after joining BJP, Radha ravi made a speech asking what is the connection between DMK and Nayanthara.

In the Kolayuthir Kaalam press meet that took place in the year 2019, actor Radha Ravi who is known for hundreds of films, said “Nayanthara has acted as a ghost and as goddess Sita as well. Earlier, K.R. Vijaya was the most popular choice to play the role of a goddess. Today, anyone can be cast to play a goddess. They can cast someone who you want to pray to when you look at them, they can also cast someone you want to call towards you when you see them,”

Reacting to this speech of the senior actor, Nayanthara released a press note condemning Radha Ravi and the people who clapped for his speech. Read : Nayanthara’s Official Statement Against Radha Ravi’s Misogynist Speech About Her !! Now, after two years, Radha Ravi, after joining BJP, made a comment on the issue.

“I have never talked about Nayanthara at all. But media blew it up as an issue by writing about it. I too accepted it on the flow. As soon as the news broke out on media, DMK started over reacting to it. They suspended me from the party and I announced that I will be leaving it permanently. The news came out on Sun TV as I gave an interview about it” Radha Ravi said.

#RadhaRavi the star campaigner of B.J.P hasn’t learned his lesson nor would never learn I suppose… He yet again shames #Nayanthara in a stage!!

I wonder how can he get away with such disgusting, disgraceful, ill talks on one of South India’s biggest actors…!! https://t.co/cwFsEFPuub pic.twitter.com/7hia5FfVDU

He further asked what relationship DMK have with actress Nayanthara. “Is she works as a minister of propaganda for DMK. What could I do if Udhayanithi has a relationship with Nayanthara ? I’m just talking about their onscreen relationship” he asked and strred controversy.

Many users of social media platforms slammed the actor for making such derogatory statement against Nayanthara again.

If you have candidate like these how you gonna win in Tamilnadu every one in state how he respects women @BJP4India #radharavi #Nayanthara pic.twitter.com/jLRvUaQbAi

Some creatures never change for god’s shake. Mark my words #Radharavi , one day you gonna stand shameless in front of her. She will rise and show you how to respect women. #Nayanthara

Misogynistic #Radharavi stop your speech its not bringing hatred.
Winning hearts by spitting r blaberring something nd getting applause its for time being oly.
But later u wanna see your famioy members too in your home that too women 🙏#Nayanthara we r tr fr u mam https://t.co/QeL7pngCYW

#RadhaRavi you think women are so week that you can say anything you can & still nobody’s going to act on it!!! Oh come on pls 4 ur publicity stunt do not use our #LadySuperstar Nayanthara and what the hell is your problem??You should Apologize Nayanthara #radharavi shame on u😠