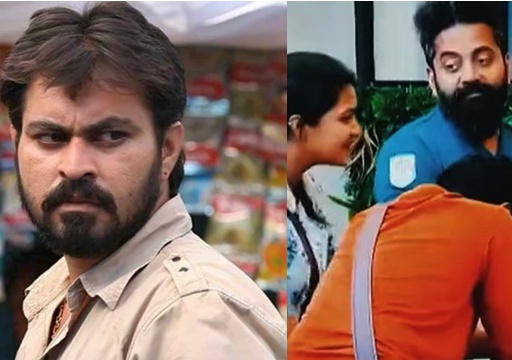 Television actor Dinesh who got separated from Rachitha Mahalakshmi after marrying her years ago, reacted to the way Robert Master is behaving towards her as per a report of Indiaglitz. Sharing the hashtag “Stand for Rachitha”, Dinesh said that he got really surprised and overwhelmed on seeing the posts and stories shared by the supporters of the actress.

“When a girl is friendly and feeling happy for everyone, doesn’t mean she is all. Men like certain idiots should grown up to create a comfortable society for all human beings to live with peaceful freedom” Dinesh said in his Instagram story.

Here’s the screenshot of the story he shared : 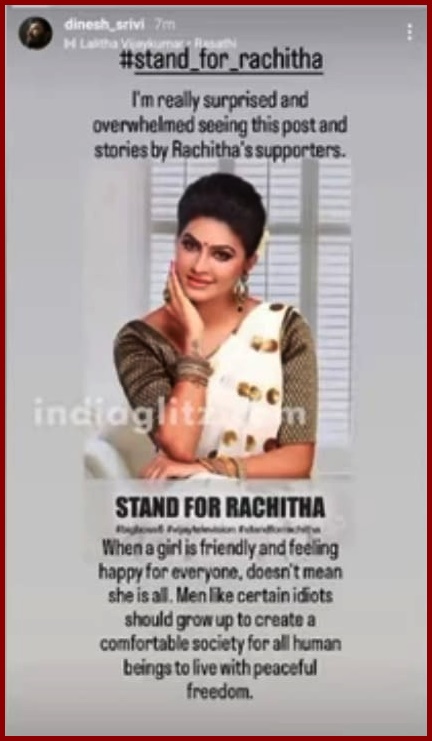 Earlier, A video that shows dance choreographer Robert forcing actress Rachitha Mahalakshmi to kiss him even after she says that he is like a brother to her, has irked the viewers of Bigg Boss show. In the video, Robert who is fondly called as “Master” by the housemates, calls Mynaa and asks her to kiss him as a brother to make Rachitha follower. However, the latter politely denied and left the place.

The video is going viral in social media platforms with many viewers expressing their displeasure over the behavior of Robert. A romantic track between Robert Master and Rachitha is taking place inside the Bigg Boss house and a recent video that shows the seasoned dance choreographer saving her from camera capturing her in a wrong way trended widely.

In another video, Robert could be seen kissing Shivin on her cheek and asking her to pass on it to Rachitha has also surfaced in the internet platforms. Many other video compilations of Robert Master starring at Rachitha while she was involved in doing something are doing rounds among the Bigg Boss viewers as well. As a result, hashtag “Robitha” was also trended in the micro blogging social media site. Most lately, viewers were demanding red card or the dance choreographer

A number of reports from renowned media portals had said that popular television actress Rachitha divorced her husband and has been leading a life separately. According to Indiaglitz, the actress, in one of her recent interviews, had hinted about her separation by saying that she could completely relate with a character named “Sadhana” in “Solla Marantha Kadhi” serial.

Hailing from Bengaluru, Rachitha fell in love with her co-star Dinesh Gopalaswamy. After being involved in a romantic relationship with the TV star for a few years, the couple got married in the year 2015. Recently, a rumour emerged saying that things were not in good terms between the couple and they are heading towards divorce.

Reacting on the same, Actor Dinesh, in his interview with Indiaglitz, confirmed that he got separated with the actress. “We looked good initially and everything was perfect at that time. After that, problems started taking a toll in our lives. As an elevation of such problems, a small separation took place between us” Dinesh said. 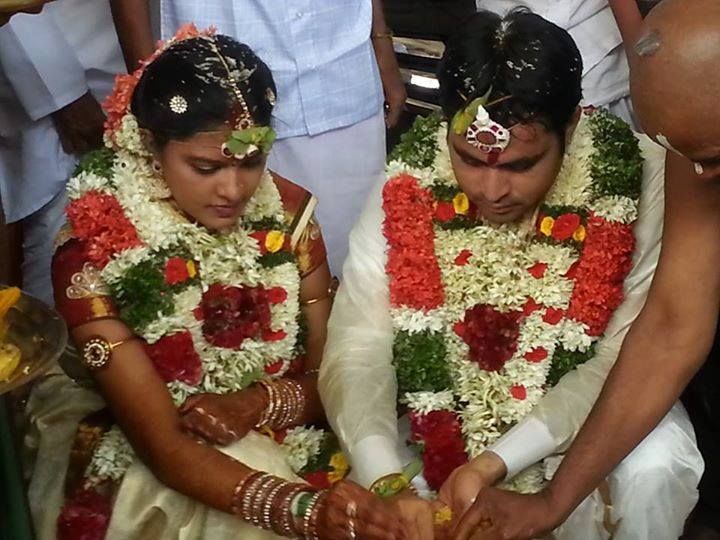 “Rachitha. knows about what is good and bad in life. No one could judge her easily. She is very much passionate in her profession as well. She is very much dedicated as far as her work in concerned. She is travelling towards her passion as of now. I guess she is taking time for things that comes in her way. I also don’t know whether I couldn’t match her speed. We needed time to realize all these things is what I guess. I hope everything to get back to normal soon” the actor said inthat interview.

Rachitha Mahalakshmi is known among the television audience through her stint in “Saravanan Meenakshi” serial of Vijay Television. She made her debut in the year 2011 through a serial “Pirivom Sandhipom”. “Naam Iruvar Namaku Iruvar”, “Sembaruthi”, “Ilavarasi”, ” Swathi Chinukulu” are some of the serials she has been a part of in the past. She also acted as heroine in a Tamil film titled “Uppu Karuvadu” and a Kannada film “Parijatha”. She is also committed to do lead lady in another upcoming movie named “Ranganayaka” co-starring Jaggesh.

Previous article19 Year Old Jeslin Thrashed Ex-Boyfriend By Hiring Goons With Her Current BF!!
Next article“They Will Forget Me After Their Growth” – Delhi Ganesh About Pradeep