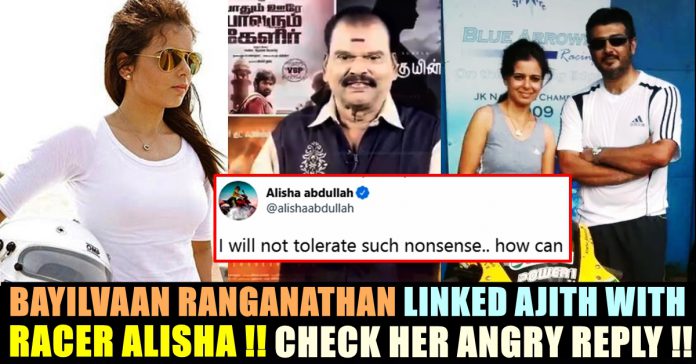 Popular cinema reporter and actor Bayilvaan Ranganathan’s recent video for Kumudhan youtube channel caught in controversy after the one whom he gossiped about condemned him through her official twitter account. In that video, Bayilvaan Ranganathan linked actor Ajith kumar with his fellow racer Alisha Abdullah by saying that they are very close to each other. However, Alisha who saw the video, immediately came up with a denial, condemning the magazine.

Alisha Abdullah, India’s first female national racing champion, recently appointed as the President of Human rights, Anti Crime, Anti corruption of tamil nadu. Bayilvaan Ranganathan who is known among Tamil audience for appearing as a character artist in comedy scenes of Vadivelu, Vivek, Goundamani Senthil, has reported that she received blessings from him after being honoured with the posts.

Very happy to Appoint 200 members under our Organisation.. Being the president of Tamil Nadu of anti crime, anti corruption and human rights (Listed by central government) I have huge responsibilities to carry forth from here on… 🙏🏻 @nhracacb.tamilnadu @nhracacb #alishaabdullah #anticrime #anticorruption #tamilnadu @kanimozhi.karunanidhi

“Ajith kumar and Alisha became close friends as they both are involved in racing. Recently she got appointed as President of Human rights and Anti corruption for state tamilnadu. After being appointed for the post, Alisha didn’t thank central government but thanked Ajith kumar by touching his feet. She told him that she got the post only because of him” said Bayilvaan Ranganathan in his video.

Reacting to the news, Alisha posted a tweet saying that she won’t tolerate such nonsense. She wondered how Kumudham allowed him to speak such crap. She expressed her disappointment over the reporter trying to spoil Ajithkumar’s name and on herself being dragged into a gossip through her tweet. “I will not tolerate such nonsense.. how can #kumudam Spk such crap.. spoiling such a big stars name Mr Ajith sir.. and dragging me into this gossip! Pls stop all this! Stop Spoiling names like this” her tweet read.

I will not tolerate such nonsense.. how can @KumudamReporter #kumudam Spk such crap.. spoiling such a big stars name Mr Ajith sir.. and dragging me into this gossip! Pls stop all this! Stop Spoiling names like this #AjithKumar #stoprumour pic.twitter.com/GRxFPCB2QR

Being one of the leading actors of Kollywood, actor Ajithkumar enjoys a huge fan base in Tamilnadu. Despite of getting a humongous amount of love from his fans, Ajith refused to have fan clubs and dismantled it few years ago as he wants his fans to look after their families. This only increased the love of fans for him as they started admiring him more for his attributes. Apart from acting, the actor is known for his car, bike racing stint. He is also passionate about UAVs and drones. Recently he has been appointed as the test pilot and UAV system advisor by Madras Institute of Technology for Medical Express-2018 UAV Challenge.

During the earlier stage of his career, the actor allegedly involved in a romantic relationship with actress Heera with whom he shared screen space in the film “Kaadhal Kottai”. However, he got married to actress Shalini in the year 2000 and the couple are a proud parents to two children. On the work front, he is expected to appear in H.Vinoth’s Valimai which is supposed to go on floors post lockdown.