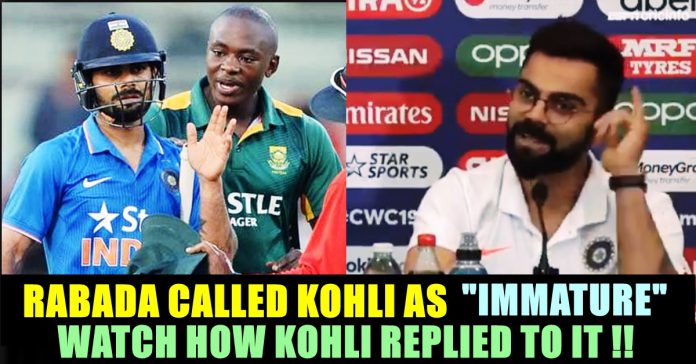 South African fast bowler Kagiso Rabada has described Indian captain Virat Kohli as “immature” and someone who cannot take abuses, while talking about a face-off between the duo in an IPL match.

Rabada and Kohli had a verbal exchange during one of the IPL matches between Delhi Capitals and Royal Challengers Bangalore. Kohli is the captain of RCB while Rabada plays for DC. Asked about that particular face-off with Kohli in the IPL match, Rabada said, “I was just thinking about the game plan, really, but Virat, he hit me for a boundary and then he had a word. And then when you give it back to him, he gets angry.

“I don’t get the guy. Maybe he does it because it gets him going, but that comes across as very immature for me. He is a phenomenal player but he can’t take the abuse,” Rabada was quoted as saying by ‘The Cricket Monthly’ from ESPNcricinfo. Now the Indian captain has responded to the remark while interacting with the press.  Replying to Rabada’s comments, Kohli said he doesn’t want to respond to any player through a press conference before going on to say that the Indian batsmen need to be vary of the threat that Rabada possesses when they take the field in Southampton on Wednesday.

“I’ve played against Kagiso (Rabada) many times and I think we can discuss anything that needs to be discussed man-to-man (on Kagiso calling him immature). I don’t need a press conference to answer anything on what he said. Rabada is a world class bowler. He has the kind of skill set to go through any batting order on his day.

Kohli was unaware of Rabada’s remarks until the question popped up in the pre-match press conference on Tuesday and then he hit back at the South African pace spearhead and said he would like to discuss the matter man-to-man.

The Kohli-led side will open their World Cup 2019 campaign against South Africa. On the other hand, South Africa will be playing their third match in the quadrennial event after having lost to hosts England and Bangladesh. Kohli also informed that Kedar Jadhav is back to full fitness after his struggle with a shoulder injury. “The lessons from the Champions Trophy — is to play the cricket we know how to play. In the final, the better side won. We have plugged the gaps. We brought in wrist spinners to take wickets in the middle overs. We are a stronger side than Champions Trophy side.”

The 30-year-old also expressed confidence in his team and said they have a good chance of winning the games.