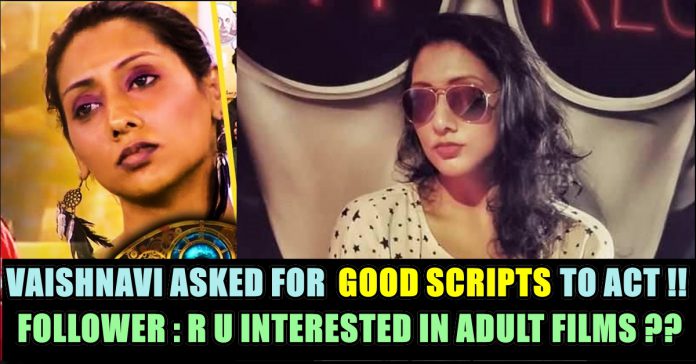 She is the first contestant to be locked inside the secret room this week. Vaishnavi is expected to stay in the house for a few days, closely observing the behaviour of the inmates and specifically having an eye on the words mouthed by them.

Immediately after exiting the show within hours, Vaishnavi caught up with her bestie and former co-contestant Ramya NSK. Vaishnavi has shared the pictures of the same on her social media handle. Ramya was evicted from the house few weeks ago
Nowadays she is very much active on social media that sometimes we can see her interacting with the fans of BIGG BOSS.

Vaishnavi is a radio jockey b y profession from Chennai. She is a less known personality but with joining the Bigg Boss Tamil Season 2 in 2018, she got the limelight.

She has done her graduation in mass communication and currently and Her grandfather Vishwanathan was a journalist at Saavi Magazine.

RJ Vaishnavi is in the relationship with a guy. We can also find her in some of the shortfilms in Youtube platform. While being inside the house Vaishnavi expressed her wish of becoming a heroine in Tamil cinema. She said that she would only do the characters which has depth.

Recently in twitter she wrote that she want some good works to do to get rid of bigg boss rust. she wrote “I am looking for some good work. Good scripts to act, stories to write, ads, photo shoots, events. Want to get away from this rut of post BiggBoss boredom. Get in touch if you want me on your projects.”

I am looking for some good work. Good scripts to act, stories to write, ads, photo shoots, events. Want to get away from this rut of post BiggBoss boredom. Get in touch if you want me on your projects.

To this tweet Vaishnavi replied with laughing smileys without saying anything :

Vaishnavi had not stopped conversing with her followers there. She replied to this tweet also by writing “I’d rather stab myself with a stapler till my intestines come out” by attaching a GIF image :

I’d rather stab myself with a stapler till my intestines come out pic.twitter.com/wjDh9UDbAi

We could not find either she said that for acting in a adult movie or she said it only because of acting in it with Danny. What do you think on this conversation let us know !!