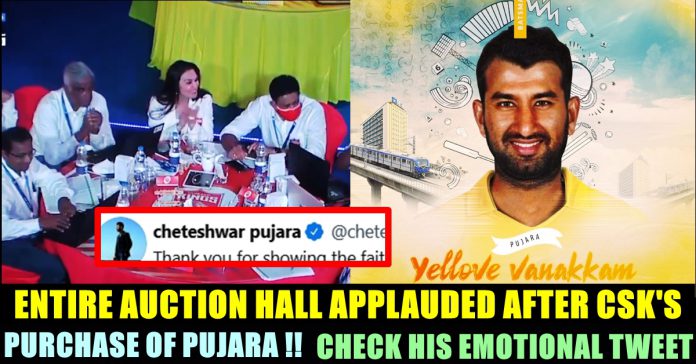 Indian Test star Chateshwar Pujara made his come back to IPL since 2014 with the help of Chennai Super Kings franchise. The MS Dhoni led team bought him for his base price Rs. 50 lakh. The star who impressed the fans and experts with his outstanding performance in Australian test series, thanked CSK by uploading an emotional tweet and it is garnering a huge reception from the fans of Chennai Super Kings. Earlier, CSK bought Moeen Ali and Krishnappa Gautham for Rs. 7 crore and Rs. 9.25 crore respectively.

The cricketer will be joining his former teammates MS Dhoni and Suresh Raina during his IPL stint. He has not played the IPL since 2014 after having represented Punjab Kings, Royal Challengers Bangalore, and Kolkata Knight Riders. Pujara has played 30 IPL matches and has 390 runs at a strike rate of close to 100.

“We welcome the legend, Che #Bujji with a super cute applause from the auction hall! #WhistlePodu #SuperAuction” wrote the official twitter handle of Chennai Super Kings after buying the right hand cricketer.

We welcome the legend, Che #Bujji with a super cute applause from the auction hall! #WhistlePodu #SuperAuction 🦁💛 pic.twitter.com/6RdJkKBy5O

All the members of other teams showed respect and applauded CSK management after they bought the cricketer.

A lovely moment of respect today when Cheteshwar Pujara was sold to CSK at the #IPL2021Auction 👏pic.twitter.com/x8LVhEtK6n

Pujara who is considered as a test specialist, is undoubtedly one of the biggest match winners for team India in tests. However, he hasn’t proved himself in the shorter formats of the game. In 2019, the cricketer had scored his maiden T20 hundred for Saurashtra in the Syed Mushtaq Ali Trophy against Railways in Indore. He smashed a 61-ball unbeaten 100, slamming 14 boundaries and a six months after he went unsold at the IPL 2019 auction.

Trolls and memes targeting CSK team for choosing Pujara at the auction started surfacing in social media platforms, as soon as he was picked. However, a number of fans and experts expressed their support for the team after he was chosen by the team.

Everyone clapping for Chennai Super Kings after the bid of Pujara.

My absolute favourite thing about the #IPLAuction so far is Pujara getting a deal. Outstanding.

Finally, Pujara gets sold. And the applause that broke out in the auction room told a story. Well done CSK #IPL2021

Now, replying to the tweet of the official twitter handle of Team Chennai Super Kings, Pujara thanked the team for having the faith. “Thank you for showing the faith. Look forward!” he replied.

Thank you for showing the faith 🙏
Look forward! https://t.co/t7QlT6SGW1

As soon as the next directorial of Pa. Ranjith after "Kaala" got released on Amazon Prime, reviews and reactions are pouring from all the...

During the Police investigation, accused Satheesh requested Police not to hurt him out of pain according to the report of Dinamalar. Followed by the...