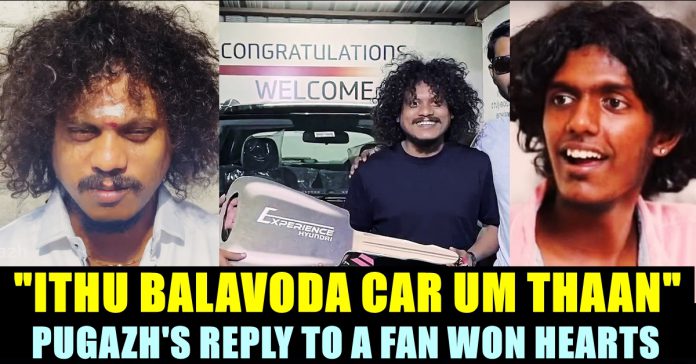 Entire Internet celebrated Pugazh after he bought owned a new car for himself through his sheer hard work. Memes, reactions, designs, illustrations surfaced lauding the aspiring comedy actor who rose to fame through “Cooku with Comali” cookery show. Now, a reply he made to a fan of “Kalakapovathu Yaru” fame Bala in Instagram is going viral in social media with heart warming reactions.

Days ago, Vijay TV fame Pugazh bought his first ever car and released a video in his youtube channel, sharing about his happiness. Pugazh who came to Chennai from Cuddalore, initially participated and performed in “Sirippuda” show during 2016. However, the much awaited break for him came after he started participating in “Cooku with Comali” show of Vijay TV as a “Comali”.

Pugazh gained huge fame through his humorous one liners, witty punch lines and hilarious reactions. The aspiring actor is already enjoying a separate fan base in social media platforms. Recently, he bought a Hyundai experience and shared an exclusive video for his fans. He revealed that he is the first one to buy a car in his entire generation which consist several drivers. The 30 year old motivated his followers to work hard to achieve their dreams and shared about his happiness on owning a new car after working as an employee in a car wash facility.

Users of Tamil internet, along with many celebrities celebrated the star for his achievement by uploading posts, making posters and illustrations. Meanwhile, a fan of comedian Bala uploaded a sad meme in Instagram saying that he is thinking of Bala. The meme showed the popular template from “Kadhalar Dhinam” film and the fan said that he feeling said for Bala while the entire world is celebrating the success of Pugazh.

On seeing the meme going viral in Instagram, Pugazh, immediately came up with a reply saying that the new car he bought belongs to Bala as well. “This car belongs to Bala too my dear friend. Don’t feel. We two are the same” said Pugazh by writing “Ithu balavoda car um than nanba don’t feel nanga vera illa” his story read.

Bala reacted to this story of Pugazh by saying “Love you lots maame, namma car ithu” in his Instagram story.

The duo are entertaining the audience since season one of “Cooku with Comali”. On seeing them united, followers of the show felt overwhelmed and started creating memes for them. Pugazh shared a post of a fan who said both are equally talented. The fan wanted the duo to be happy together forever.

“As you all know, I am a boy who was washing cars to meet my ends. You people are the reason for the fame I gained worldwide. My grand father is a driver, My uncles and many others from my family are drivers. Though many advised me not to involve in the transport industry, I didn’t listen to them and started working there” Pugazh said after buying the car.

“I am doing this video only to inspire people. Every one could achieve what they dream. I am the first one to buy a car in my generation. When I said about this to my mother, she felt extremely proud and shed tears” Pugazh said. “My only wish is to make people happy” he added.

“I have washed many cars for the tips of Rs. 10 and Rs. 20. Now, owning a car makes me feel extremely happy.” Pugazh expressed his happiness and thanked his followers. “I will never let my success get into my head. No matter how far I go, I would always credit my fans for my success.” he added. Pugazh also felt bad for the demise of Vadivel Balaji who helped him a lot during his stint in Vijay TV.

Previous articleShakeela’s Sharp Reply To A Commenter Who Criticized Her Choices !!
Next articleKarthick Naren Planning To Do A Prequel For “Master” ??

Renowned Journalist Nakkheeran Gopal who is known for shedding light on the truth in the serious issues that are taking place in the society...

Chinmayi Responds To An Abuser Who Termed Her Press Meet Video As “Hot Show” !!