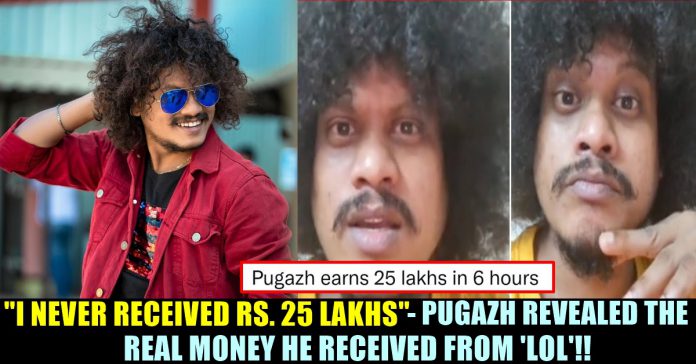 Pugazh Opens About The Real Cash He Received From The LOL Show!!

Cooku With Comali fame Pugazh, in an interview with the reporters, was asked about the 25 lakhs he won in ‘LOL: Enga Siri Paappom’. The comedian has replied humoristically to the question.

Pugazh rose to fame through the show Cooku with Comali, telecasted on Vijay TV. He appeared on both the shows and received a huge fan base through the show. People watched the show enthusiastically for Pugazh. His sense of humor, gestures, flirting with Ramya in the first season, Pavithralakshmi, and Darsha Gupta in the second season had made people laugh out loud and gained more celebrities as the fan of the show. Following this, Pugazh was given an entry ticket to enter Kollywood. Now he has become one of the busiest comedians in the K – Town. He has a huge lineup of movies on his list including Thala Ajith’s Valimai, Vijay Sethupathi’s movie with director Ponram.

Recently, the ‘LOL: Enga Siri Paappom’ show was released on Amazon Prime on 27 August 2021. Ten comics participated in the show and were not supposed to even smile. Apart from their performances, they were also given tasks. The winner was to be rewarded with Rs. 25 Lakhs. Comedian Vivek and Actor Shiva were the hosts of the show. This show was watched by everyone as this is the last appearance of Comedian Vivek on screen.

Stand Up Comedian and Comicstaan Winner Abhishek Kumar and Pugazh were declared as the winner. On social media, everyone was spreading the news that each of them is given Rs. 25 Lakhs. In the news everyone was telling Pugazh is gaining more fame and he must be spinning the fortune wheel to receive Rs. 25 Lakhs in 6 hours.

In an interview he gave to the reporters when he visited a cycle showroom he was asked about the show. Pugazh made it clear that he won the show and Rs. 25 Lakhs was split between him and Abhishek Kumar. From the money he was rewarded, Pugazh has received only 7 lakhs as the rest of the cash was taken for Tax Deducted at Source (TDS).

Pugazh was also asked for movie updates. Pugazh said that he has acted in two movies with Santhanam and waiting for its release and few other huge projects will be updated soon. When he was asked about entering Bigg Boss he confirmed he isn’t participating.

Previous articleVijay Sethupathi Reacts To People Who Wants To Know About His Identity !!
Next articleHarbhajan Singh’s Reply To Venkat Prabhu Goes Viral!!