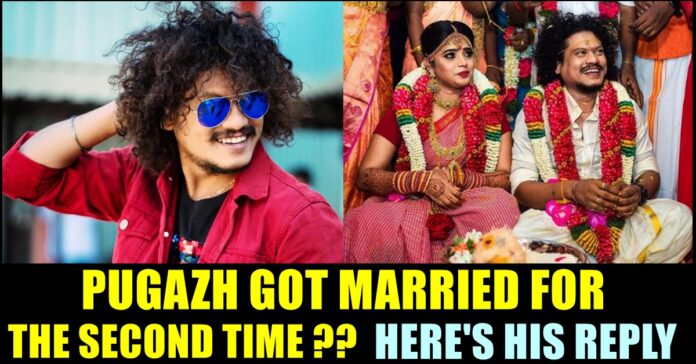 Popular television star Pugazh got married to his long time girlfriend Bensiya recently and grabbed the headlines. Many celebrities from television and cinema industry wished the comedy actor and his newly wed wife a happy life ahead. Meanwhile, a report surfaced saying that Pugazh already married Bensiya as a self respect marriage. According to the report of Polimer, the marriage took place a year ago.

Reports suggests that Pugazh and Bensiya met seven years ago and has been involved in a romantic relationship ever since. A grand reception is expected to take place on 5th of December with the presence of top celebrities from television and cinema industry.

Pugazh gained huge fame through his humorous one liners and reactions which he delivers in the “Cooku with Comali” show. The aspiring actor is already enjoying a huge fan base among the Television audience who are regularly watching the show. He who came to Chennai from Cuddalore, initially participated and performed in “Sirippuda” show during 2016. However, the much awaited break for him came after he started participating in “Cooku with Comali” show of Vijay TV as a “Comali”.

After gaining fame, the 30 year old actor became busy and started receiving movie opportunities. He who got committed in a movie with Vijay Sethupathi, is also rumoured to be acting with Silambarasan in one of his upcoming movies. He is also doing product endorsements and actively participating in inaugurating stores. The actor also playing the lead role in a film named “The Zoo Keeper” shooting of which took place at Thailand recently with the presence of Animals. The film is expected to target the audience.

Now, a report emerged saying that the actor married to his love last year as a “self respect marriage” in a place called “Periyaar Padippagam”. “Self respect marriage” or “Suyamariyathai” marriage is nothing but legalizing Hindu marriages conducted without a Brahmin priest. This was implemented as Hindu Marriage Act (Madras Amendment) Act, 1967, introducing Section 7A, permitting Suyamariyathai (self-respect) and Seerthiruttha (reformist) marriages as legal when solemnized in the presence of friends, relatives or any other person by exchanging garlands or rings or by tying of a mangalsutra or by a declaration in language understood by both parties that they accept each other to be their spouse.

In a way of replying to such reports, Pugazh came up with a post saying that he married Bensy for the love of his father one time, his mother one time and the family of Bensy one time. “I am ready or one more time if my loveable hearts asks for it one more time” Pugazh said through his post.

Chinmayi Shared Screenshot Of A Message From One Of Her Woman Follower!! HORRIFIC !!