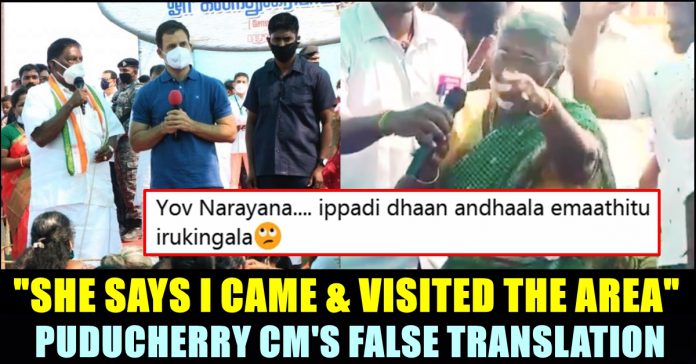 On Wednesday, former Congress president Rahul Gandhi met the fishermen of Solai nagar fishing village, Puducherry. He interacted to the fishermen at the Coastal village along with Puducherry Chief minister V Narayanasamy. Rahul Gandhi conversed to the public with the translation of Cheif minister V Narayanasamy. Now, a video of the Chief minister providing false translation to Rahul Gandhi in order to protect his reputation from getting damaged is going viral in the social media platforms.

Rahul Gandhi advised the people of the coastal area to organize themselves and stand united to make themselves heard by the BJP government at the centre. He said that the central government is crushing all small and medium businesses as they want them to be controlled by big corporates.

He further said that the farmers is the backbone of the country and he considers fishermen as the farmers of the sea. “What the Modi government wants is that one or two very rich people to control the sea, but Congress wants lakhs of fishermen to control it,” Rahul gandhi said.

While responding to the questions and grievance of the people, Rahul Gandhi asked them to take him to the sea next time and believed that it would help him to understand their difficulties much better. Many of them worried on the women, their education, livelihood and employment. He also answered to one of the questions on why media is not publishing the problems of the poor.

Meanwhile, a video of, Puducherry chief minister V. Narayanasamy providing false translation to Rahul Gandhi grabbed the attention of the Internet. An elderly woman, out of dejection, said that the chief minister never visited them during cyclones.

“The coastal area has always been like this. No one is supporting us. He (Chief minister) is here. Does he ever visited us when the storm hit us ??” the woman says to Rahul gandhi and the former president of the Congress party asked V. Narayanaswamy to translate what she said.

“During Nivar Cyclone, I came and visited the area and gave relief to them. That was she is saying” V. Narayanasamy tells to Rahul Gandhi.

The video is going insanely viral in social media platforms with reactions trolling the chief minister of Puducherry. Check out some of them :

everything in life boils down to some vadivelu comedy.

Previous articleSiddharth’s Fitting Reply To A Woman Who Termed Him As A “School Drop Out” !!
Next article“Teach Me How To Bite Your Lip” – Sharan Nair !! Priya Prakash Varrier’s Reply Grabbed Netizen’s Attention !!

Mohammed Shami, once again caught in controversy but this time during the world's biggest cricketing tournament. He is one of the prominent pace bowlers...