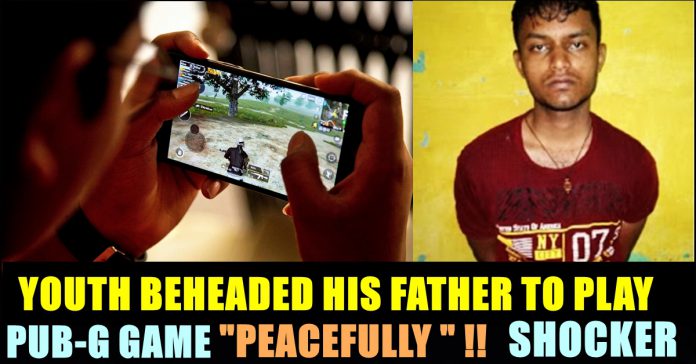 PUBG Addict Killed His Father For Not Letting Him To Play The Game!! SHOCKER !!

The game has built a die-hard fan following for itself and people are so crazy that they are proudly ignoring their family members and partners for it. Now to our shock, a 25 year old boy went to the whole new next level that he killed his own father to play this game.

The incident occurred in Karnataka’s Belagavi district on Sunday night. 25-year-old Raghuveer Kumbar allegedly killed his father Shankrappa Kummar (65). Raghuveer was addicted to playing PUBG and his father objected to him playing the game. This led to constant fights between them.

The deceased, identified as 65-year-old was a retired policeman and often used to tell his son to not play PUBG all the time and this led to quarrels between the two. On Sunday night, there was another heated argument between father and son. Irritated son, went out threw stones at the windows of the neighbours. The neighbours called the police who took Raghuveer and his father to the Kakati police station.

Shankrappa told the police that his son was addicted to games such as PUBG and Final Combat. The police officer let them go after counselling the youth for nearly an hour.

Despite the counselling, Raghuveer continued to play the game after reaching home. Shankrappa again shouted at him and told him to go to sleep. Raghuveer woke up at 5 a.m. and attacked his father in his sleep, after locking his mother’s room from outside. The victim’s cries awakened the mother who raised an alarm. A neighbour woke up and called the police. By the time the police arrived, an enraged Raghuveer killed his father and cut off his head and legs so that he could play the online game PUBG on his mobile phone in ‘peace’.

The youth told the police that he was very at him father for not letting him to play the game. A team of officers led by Shreeshail Koujalagi visited the spot. The accused has been arrested and the assigned team is questioning him.

Anand Devarakonda Hits Back At Popular Actor For Mocking His Brother !!

A Bollywood actor named as Gulshan Devaiah criticized Vijay Devarakonda for his recent statement on voting system. In defence, Anand Devarakonda, brother of the...

Vidyu Raman Shuts Down Followers Who Criticized Her For Her Swimsuit Post !!

Popular actress Vidyu Raman who is known for the roles she played in films such as "Veeram", "Neethane En Vasantham" etc, slammed her followers...