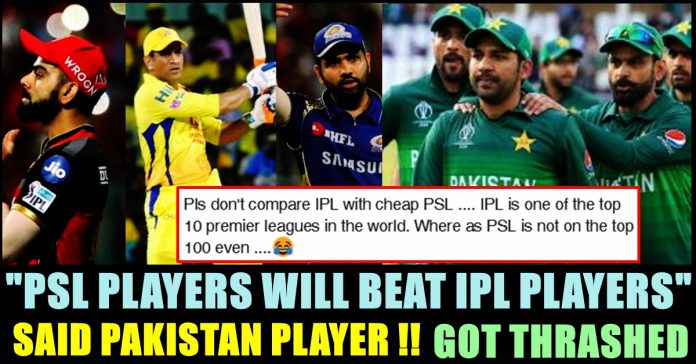 The rivalry between team India of cricket and team Pakistan has always been a never ending one. As the countries stopped playing one to one due to security concerns in the matches involved with the players of Pakistan, both the teams faced each other in the tournament conducted by ICC.

Though the teams stopped playing with each other, the rivalry stays the same which is evident through the comments passed by the players of both the teams. Recently, former player Abdul Razzaq has been grabbing the headlines for his comment on semi finalists of the world cup tournament.

From taking a sly g at captain Virat Kohli’s captaincy to offering to coach Hardik Pandya, Razzaq seems to have very much interested in criticizing team India and its players. His recent statement on best eleven players of Pakistan Super League can win the best eleven players of Indian premiere League has instigated the fans of IPL to troll him ruthlessly.

The cricketer who believes that PSL’s best eleven could win IPL’s best eleven if they play a Twenty20 game between them said his opinion to public through a Pakistan Journalist Saj Sadiq. “Abdul Razzaq “if a team of the best players from the Indian Premier League faced a team made-up of the best players from the Pakistan Super League, the PSL team would win” #Cricket” read the tweet of the Journalist.

This comment from the Pakistani cricketer made the fans of cricket game laugh their lungs out. They trolled him without a second thought through their hilarious comments.

Somebody wake him up. Abdul is day dreaming.

Even Players sitting on bench during @IPL can beat best team of @thePSLt20.

And to dry the pitch you can use helicopters because no Paki broadcaster uses spidercam in PSL,which has Cabled structure on stadium. 😂🤣 https://t.co/QShpZIi9ik

What rubbish. Even RCB would win the PSL

Stand up comedians like Abdul Raazaq should stick to stand up comedy instead of IPL https://t.co/1AkoakRegU

At the end of 2019 PSL tournament, the commentators of the league made a list of best players of the tournament which included 7 Pakistani players. Check out the list below :

Meanwhile Indian legendary cricketer VVS Laxman also made a list of 11 best players of IPL. Check out the list of players below :

Now decide for yourself on which team would win a T20 match !!

Previous articleFans Trolling Vijay Devarakonda For His New Advertisement !!
Next articleFirst BIGG BOSS 3 Contestant To Sign A Movie !! Check Who !!

RJ Balaji Got Criticized For Not Knowing How To Drive A Car In Shooting Spot !! Check How He Handled The Situation

RJ Balaji who started his career as a radio jockey, is currently busy acting in movies for Kollywood film industry. He who also gets...

Bigg Boss Got Extremely Angry After This Contestant Asked About TRP!!

After Myna asked Nivashini about how the show is performing among audience, Bigg Boss got pretty much upset and asked the television star to...

Siddharth Blocked Gayathri Raguramm In Twitter !! Check What The Actress Has To Say

Actor Siddharth who is known for appearing in films that were made across the country, has never shied away from expressing his disagreement on...

Malayalam actor Sreenath Basu got arrested and later released on bail after abusing a female anchor on air. Video of the actor making the...