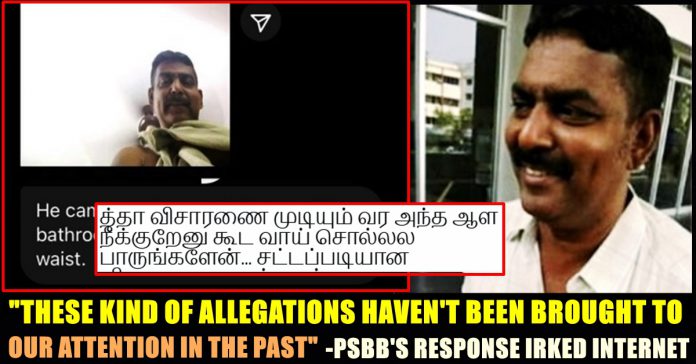 The management of Padma Seshadri Bala Bhavan group of schools released a public note, addressing the enormous number of complaints emerged against one of their faculties named Mr. Rajagopalan. The note which said that the school has zero tolerance towards the behaviour that affects students physically, emotionally and psychologically, mentioned those kind of allegations had not brought the attention of the management in the past. The statement has irked many of the public as there are several stories of students surfaced saying that the management turned a blind eye whenever complaints were made.

The note neither mentioned name of Mr. Rajagopalan nor announced his suspension until the investigation ends which left many in a shocked state. “Dear Parents & Students, Greetings! You may have come across certain allegat ions against a teacher of our KKN Nagar school in social
media posts. We would like to assure you that our school has zero tolerance towards any behaviour that adversely affects the physical, emot ional and psychological well being of our students.” response of PSBB read.

“Contrary to what is mentioned, these kind of allegations have not been brought to the attention of
the management in the past. However, we are taking suo motu notice of the allegations and will
take all necessary steps to address the situation in a free, fair and transparent manner.
The welfare of our students has always been and will be our top priority. Assuring you of our most appropriate course of action. Stay safe, Stay healthy” it further said.

In one of the stories added by Model Kripali who has been sharing the messages sent to her by the students personally, a student could be seen worrying that several complaint letters are being sent to the authorities batch after batch but no action has been taken against Mr. Rajagopalan so far. “The way he treats his girl students is absolutely disgusting. And what is even more disgusting is the sheer number of complaint letters we’ve been sending to the authorities, batch after batch and zero action was taken against him. And some of us were even subtly threatened into silence because he would “ruin our future” if he willed it” says one of the messages.

Here’s another set of messages where a student had said that she directly complained to the dean and there was no action taken against the teacher :

On seeing the response of the school management, a social media user wrote “Such a meek response. I expected “suspension till further investigations” at the least. Just shows the school will do nothing about this and wait for it to die on its own. Let us keep up the pressure. PSBB you are NOT getting away with this.” in her tweet whereas another one said “Addressing a complaint should not begin with gas lighting those who have complained by saying no such issue was highlighted earlier. Basically calling the kids liars. Expected better from GiGo.”

Such a meek response. I expected “suspension till further investigations” at the least. Just shows the school will do nothing about this and wait for it to die on its own. Let us keep up the pressure. PSBB you are NOT getting away with this. https://t.co/AqbSc03RVT

Addressing a complaint should not begin with gaslighting those who have complained by saying no such issue was highlighted earlier. Basically calling the kids liars. Expected better from GiGo. https://t.co/Ln39dP3RuV

Oh, come on now!!! How can the school not be aware of this kind of behaviour that has been happening for decades!! Request and trust that the relevant authorities WILL take appropriate action on Rajagopalan and the school!!#PSBB pic.twitter.com/lYwLyOSaXP

A very inadequate response from PSBB management to the harrowing and disturbing experiences endured by girl students from a teacher named Rajagopalan. Many batches of students are saying the same things and it’s unpardonable that PSBB hasn’t taken action yet. #PSBB https://t.co/wLeCzCNk9q

Pathetic. Zero accountability. “These allegations have not been brought to us in the past” – whatttt??? https://t.co/hyXKvNkPw7

Aahan. U appoint a abuser as head of the sexual abuse redressal committee and u r telling there are no complaints received. Brilliant logic. https://t.co/wrSRQug6pV

No apology or sympathy for the horrors experienced by the students at the hands of thse predators. Besh besh. https://t.co/kBesGnQYdE

Latest report emerged saying that Mr. Rajagopalan has been brought under the police custody for the investigation. Thanth reported saying that the school management failed to co-operate police inquiry.

Update : It has been reported that Rajagopalan has been suspended from the school.

Previous articleLegal Action To Be Taken Against The “Flight Marriage” Of Madurai Couple ??
Next articleKollywood Celebrities Raised Voice Against The PSBB Faculty !!

Actress Priya Bhavani Shankar who predominantly appears in Tamil films, on Wednesday, came up with a thoughtful message on her Instagram handle, explaining about...

Man Abused Kamal Haasan For Posing With His Daughters !! Check Chinmayi’s Reply To Him !!

In Bigg Boss show, Last week, “Chithappu” Saravanan admitted to molesting and groping women deliberately on buses on an episode of Bigg Boss Tamil, while...