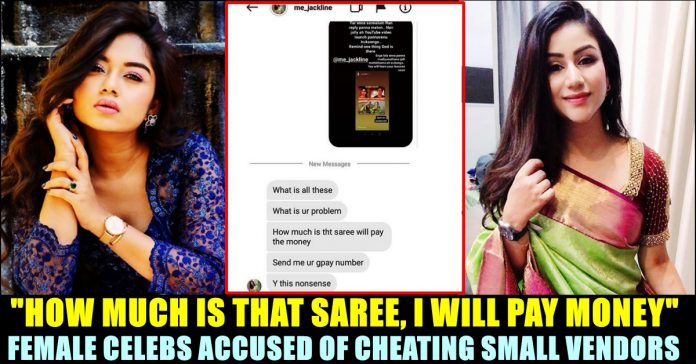 Days ago, a live conducted by actress and model Dharsha Gupta grabbed the headlines of a number of media portals. Actress Alya Manasa who rose to fame through acting in serials of Vijay Television also uploaded a couple of reply posts to the allegations of Jason Samuels on “Instagram Influencers Scam”. Now, a report of Vikatan got surfaced analysing the “scam” reported by Jason Samuels whose Instagram bio says that he is an Entrepreneur.

In this digital era, marketing products through social media platforms became one of the most efficient ways of selling one’s products. It is common for merchants to hire well known personalities such as cinema/sports celebrities to endorse their products in order to make large number of people buy their product.

In this world which shrunk within a cell phone that is connected to Internet, most of the vendors are seeking the assistance of celebrities with highest number of social media followers to vouch the products they make. These celebrities who mainly work in cinema/television industries are identified as social media influencers. They who do promotions in the photo/video posting social media app Instagram are called as Instagram influencers.

The celebrities who accepts to collaborate with a brand, are supposed to upload a photo, story or video endorsing the product within the given period of time span. They charge different payments based on each brand and according to the product they are advertising. It has been reported that celebrities, apart from receiving the payment, are also end up owning the particular product they receive from the brand to advertise.

Most recently, Jason Samuel who is working on giving suggestions to start ups, has accused some of the prominent Tamil celebrities such as Dharsha Gupta, Alya Manasa, RJ Raghavi, Jacquline, MNM candidate Padma Priya, Preethi Sharma of receiving products and payments from start up companies and not doing promotions for them. He has been uploading videos under the title “Influencers Scam” and they are turning viral among the users of Instagram as well.

Through the videos, Jason Samuel has been uploading screen shots of the messages sent to the celebrities from the brand and the invoice details of the payments received by the celebrities after accepting to do the promotions. It is notable that actress Dharsha Gupta recently appeared in a live and denied allegations against her regarding the “scam”.

Interacting with Vikatan, Jason Samuel said that he belongs to Pondicherry and introduced himself as a CEO of a product designing house. He also said that he has been giving suggestions to start up companies along with his friends. Jason said that most of the start up owners found it difficult to make celebrities to advertise for their products even after paying amount and providing product to them.

“Even after one long year of receiving the product, celebrities failed to do the advertisements. They are also not replying to the messages of the start up owners after reading them. A number of start up owners sought solution from me and I decided to help them” said Jason according to the report Vikatan.

After collecting the appropriate evidence from the start up owners, I uploaded my first video on 1st April by naming the celebrities. Many of the start up company owners stormed the comment section of my post and said that they too got cheated. Most of them supported me and provided me the proofs as a result of which I started uploading videos back to back. Some of the celebrities I accused started threatening me through calls and messages and few said that I am doing it to attain fame. They even tried to block my account by reporting it” Jason further said.

Jason said that the owners of the start ups couldn’t name the celebrities directly due to their fan base. He says that he decided to face the problem on behalf of all the start ups and started releasing the “scam” videos. Jason says that celebrities such as Alya Manasa, Preethi Sharma started uploading promotional posts after the release of the scam videos.

“Few of them also started returning the money. So far brands have received Rs. 4,50,000 from the celebrities and I have provided the proofs for it in my Instagram as well” said Jason who also countered the video of actress Dharsha Gupta. Read : “CWC” Fame Dharsha Gupta Got Emotional & Shed Tears On Seeing The Memes Against Her !! WATCH He denied Dharsha’s statements and said that her manager received money from the brands. “I will continue uploading the video till the victims gets solution” said Jason.

“I won’t use the products I am receiving for promotions. I would give it to my friends. They have been raised issue about a promotion I was supposed to do for a brand of a female auto driver’s daughter. To be frank, I have shot photos by wearing the dress and gave the dress to my friend. While uploading, I came to know that I received money to do video promotion. It got delayed as I was searching for the dress. Now I have completed the promotion” she said.

Previous articleARR, Nayanthara, Vishal Didn’t Vote ?? Popular Actress Tweeted !!
Next articleVanitha Vijayakumar Is Going To Pair Up With This Busiest Actor Of Kollywood In Her Next !!

Fan who could have witnessed MS Dhoni at Chepauk stadium rolling his sleeves up to hit some mammoth sixes, managed to witness only a...