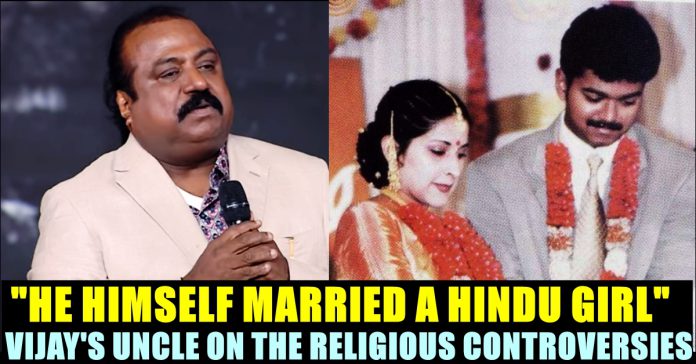 Xavier britto, producer of 2020’s most expected film “Master” and founder of XB creators, appeared in an interaction with Vikatan channel and shared about many things regarding the film, his relationship with actor Vijay and about his upcoming projects. He came on board to produce “Master” after Vijay offered him the project by remembering his request made two years ago. Britto, in the interaction says, that he explained Vijay about the financial loss he happened to face in initiating futsal sports in India and asked him if there is an opportunity to collaborate with him. Remembering the request made, Vijay, after finishing “Bigil” called Xavier Britto and asked him whether he is interested to produce the film and the producer who helped Vijay in his earlier stage of acting career, immediately accepted the offer.

Being a close relative of actor Vijay. Xavier Britto says that he produced Vijay’s Senthura Paandi, Deva, Rasigan etc. “However I bought the money as loan to produce those films as I myself didn’t have that much money back then” says Britto in the interview. Denying the rumour of acting as a “Benami” of Vijay, Britto said that Vijay just supported him morally and gave him the call sheet as an actor. “We are not even partners in any business. From the very beginning, we are involved in separate professions. I want to make money on my won and Vijay himself won’t like these kind of “Benami” business” the producer said in the interview. He also denied “Master” getting released in OTT platforms reasoning the high budget.

Talking about the criticism Vijay receiving every now and then regarding his religion, Britto said that Vijay is not a such person as they (critics) are trying portray. “If that is the case, he won’t married a Hindu girl. Even hisfather S.A Chandrasekhar married a Hindu woman as well. Now my daughter is going to marry a Hindu man named as Akash who is a brother of actor Atharvaa. I built temple for Hindus and involved in muslim community as well. I helped every religion in all the possible ways I could do” he said.

Xavier Britto became a subject to online trolls due to the long speech he delivered in the audio launch of “Master”. Many compared his speech with the speech of Christian priests in Churches. Replying to the trolls, Xavier said “It really looked funny to me. I won’t forget the people who helped me in my tough times. I will always be grateful to those who stretched their supportive hand to me. Some of those fathers who helped me came to the audio launch. I thanked them with my whole heart but it was misinterpreted” he said.

The film producer also said that he is planning to launch his future son-in-law Akash to film industry next and denied the rumour of launching Vijay’s son Sanjay.

Previous articleNagma Blocked Twitter Users After Wishing Ganguly On His Birthday !!
Next articleCheck How “Nadhaswaram” Sruthi Gave Back To This 2k Kid !!