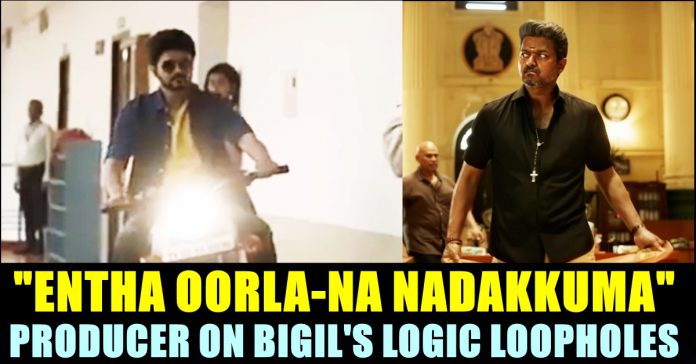 Producer K Rajan who is known for his controversial statements has once again grabbed the headlines for his statement during an interaction in a youtube channel. The producer has claimed that producers in Tamil film industry are facing failures due to Directors and actors. Earlier in an interview, Rajan thrashed directors Gautham Vasudev Menon and Atlee for the movies they made.

K Rajan is known for producing various films in Tamil and Telugu. His recent comment on “Bigil” film has grabbed the attention of the netizens. He said that there is no necessity for the film to be shot for 200 long days. Vijay-Atlee’s third collaboration Bigil became one of the most successful films of the year. The film hit the screens on 25th of October and is being watched by millions of people. No words could describe the craze level that was created by Bigil film. Director Atlee, who himself a biggest fan of actor Vijay, has directed the film which marks the third collaboration of Atlee and Vijay, has actor Vijay in the lead in three different get ups.

Now in a recent interview, K Rajan has pointed out the logic loopholes in the Bigil movie and slammed director Atlee for dragging the shooting of the film for 200 days. After directing 4 films in Tamil, Atlee became one of the leading filmmaker of Kollywood. Atlee is arguably one of the most loved and hated filmmaker of Tamil cinema right now. Being a former assistant of Shankar, Atlee’s way of presenting his films and the castings he choose for the characters are considered as his major qualities. All the four films of Atlee became blockbusters despite of the plagiarism controversies.

In the interview Rajan said the scene of Vijay’s Rayappan character meeting Collector and Inspector General is absurd. He said that the scene will influence youngsters to involve in violence. He also questioned the scene where Vijay would ride bike inside a college campus. He requested Vijay to raise question to the filmmaker when he drags the dates.

“Bigil was made with an expensive cost. Why do the film has 3 hours of duration ? A scene shows collector and IG attending a meeting with Vijay. In that scene Vijay damages a table by beating up one of the Villain’s son. Will this take place anywhere in this world ?” said Rajan who went on to use foul language to express his frustration.

“Vijay rides his bike inside a college campus. Which college allows such thing ?? Actors must question such things. Vijay is acting well in his movies but he must question this kind of behaviour of the directors.” said Rajan in the interview. Further he lauded movies like Asuran and Kaithi for its content and gaining profit to its producers. Rajan also revealed how Bigil made loss to the distributors of Trichy, Chennai and Chengalpattu.

What do you think on this interview of Rajan ?? Comment your views below !!

MS Dhoni once again proved to be crucial for the Indian cricket team as his guidance helped Kuldeep Yadav dismiss Trent Boult during the...