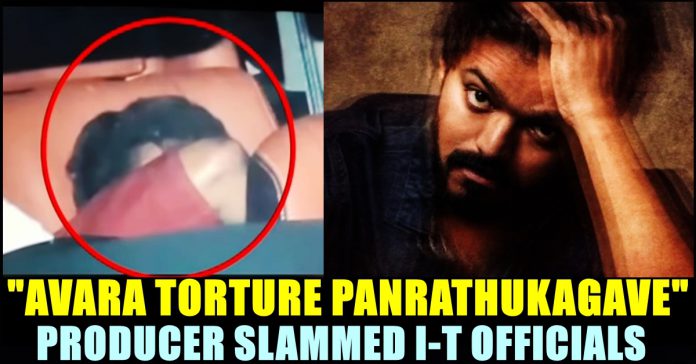 Producer and former distributor Rajan who is known for his controversial speeches in public forum, has opened on the ongoing issue of I-T raid at the house of actor Vijay. During the shooting of Vijay’s upcoming film “Master”, I-T officials entered the spot and demanded Vijay to cooperate their operation. The I-T officials on Thursday said that raids at several properties linked with the biggest personalities of Tamil film industry, including actor Vijay, has led to the discovery of undeclared income in the box office collection of Bigil.

The properties of AGS Cinemas and film financier Anbu Chezhiyan were searched and actor Vijay was questioned in the sets of “Master” regarding an alleged tax evasion case. The home which belongs to Vijay in Chennai was searched on Wednesday. Their press release has declared that the film has collected more than 300 crores in the box office which comes under unaccounted cash.

This sudden visit of the income tax officials has instigated a huge furore in the digital platforms. Fans of the actor started expressing their support towards their idol and trended hashtags regarding the same. Now producer Rajan has opened on the issue and expressed his disappointment on the I-T officials.

“What are you going to lose in that 3 hours. You sit in front of him and get his cell phone in your custody. He asked them to travel in his car but they didn’t allow him to do it. This clearly indicates us that they must have intended on torturing him” said Rajan in the interaction.

Watch the video below from 19th minute :

IT department officers who took away Vijay for questioning from the shooting spot, issued him a summon. Due to this unexpected visit, the shooting for the day was cancelled and is expected to resume after the inquiry. Reports suggests that IT Raid is taking place since Wednesday morning to inquire about the properties associated with AGS Entertainments and financier Anbu Chezhiyan.Income Tax department officers has found Rs.77 Crores during raids on the powerful financier in the Tamil film industry, according to NDTV.

What do you think on these statements from producer Rajan ?? Comment your views !!

Tamil nadu assembly election is nearing and all the political party members in the state are encouraging citizens to vote for the symbol of...