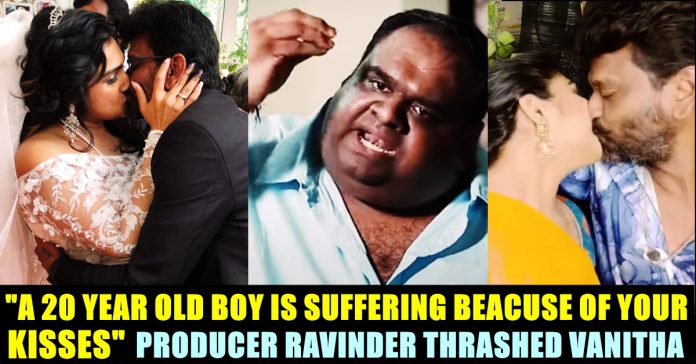 Along with public, several celebrities including Lakshmi Ramakrishnan, Kutty Padmini reacted to the marriage issue of actress and former Bigg Boss contestant Vanitha Vijayakumar. However, they deleted their comments after Vanitha replied to them in a furious way. Days ago, movie producer Ravindran Chandrasekar has expressed his disagreement over the marriage of Vanitha Vijayakumar and said that she broke the law by marrying Peter Paul who is still a husband of Elizabeth Helen, his first wife.

Ravindran called Vanitha’s decision of marrying Peter paul as “stupidity”. also addressed an issue that took place inside Bigg Boss house. “I am a big fan of Vanitha Vijayakumar since Bigg Boss. The way she made a come back surprised me and she slammed Sherin by calling her relationship with Tharshan as “Affair”. Now, the same thing is happening in her own life. “That day, as a fan I got impressed with her outspoken attitude but now I got disappointed as she is involved in a similar relationship” Ravindran said. After seeing his Interview, Vanitha Vijayakumar personally sent him a series of voice notes demanding an apology. Read : Vanitha Vijayakumar Demands Apologize From Producer !!

Now, Ravinder who appeared in another interview, asked Vanitha to apologize to him for disrespecting him within 24 hours and warned her saying that she will regret if she fails to do it. The film producer replied to the every audio note sent by Vanitha Vijayakumar in the interview.

Ravinder says that majority number of people supported him and related themselves with him on this issue. He who said that he is not going to apologize like Lakshmi Ramakrishnan or Kutty Padmini, asked Vanitha to apologize to him instead. While answering to Vanitha’s allegation on intervening in an individual’s personal life, Ravinder says that anyone can have a say in anything when a violation of law takes place. He accuses Vanitha for stealing the life of Elizabeth Helen, mother of two children. “I invited myself in this not only because of her marriage which became a subject to public forum but because of the cheat and fraudulent she committed. She is trying to take over a life of someone else illegally and whoever can comment on this” the producer said in his interview.

For calling him as “Shameless” through one of her audio note, Ravinder said that she is the one who should be called as “Shameless” for getting permission from her 16 year old daughter to marry someone when she was supposed to look after her higher studies. “A Mother should ask her 16 year old daughter about her higher studies and about her future plans but mother asking permission to her 16 year old daughter for her next marriage is the worst thing ever.” he said in his interview and also pointed out the way Vanitha and Peter Paul kissing in their videos. “When we all are raising voice together to save a life of a woman, they are kissing each other every now and then in front of public. Can’t you remember that there is a 20 year old boy is facing consequences for everything you do here?” he asked.

Ravinder also revealed that he received a phone call from a single mother supporting the way he is voicing out for the issue. He gave 24 hours for Vanitha to make an apologize in public forum for disrespecting him and said that he would stop talking about the issue only if he gets the apology.

Director, Lyricist and upcoming producer Vignesh Shivan appeared in an interaction after a long time amidst lockdown and shared about his experience in film...