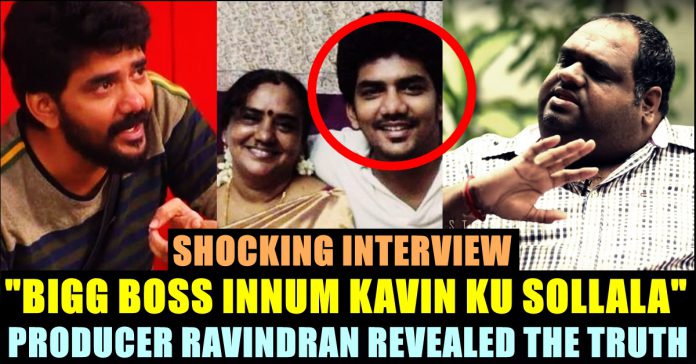 Starting from Abhirami’s verbal spat with Madhumitha to Vanitha Vijayakumar’s re-entry, the show providing its own essence unlike other reality shows. Despite the rumour of being a scripted show, Bigg Boss manages to entertain the audience in daily basis.

Among all the contestants, Kavin who is one of the very well known contestants of the BIGG BOSS show for his appearance in serials before entering the house, has became the topic in social media platforms for not so good reasons. Kavin featured in one film as protagonist which was titled as “Natpuna Ennanu Theryuma” which didn’t go well in the box office.

Now the producer of the movie has talked about the recent sensational news about Kavin’s family members being jailed for 7 years for cheating people in chit fund. Ravindran firmly says that the family is completely innocent and framed against the family. He also informed that Kavin doesn’t know about the issue yet as his family requested the Television not to inform him. Ravindran says that they the family members of Kavin were completely trapped by few in this issue.

“He is not going to do much about the situation by coming out right now. After all the money he is earning by staying inside the house could help him to run the case. The only thing which would bother us might the nature of his behaviour inside the house, be it his relationship with Losliya or with others. People might slam the television of Kavin as they know about the fact of his family” said Ravindran in the interview.

He even added that his Libra productions would stand by Kavin in this issue and would take care of his financial supports if needed. “I intentionally casted him in my movie only because I like him very much since “Saravanan Meenatchi”. Problem caused between me and Kavin only because of his immaturity. Because of his immaturity, a heroine, who is one of his closest friend opted out from my project which is being directed by Karu.Pazhaniyappan.” said Ravi in an earlier interview while talking about Kavin.

Reports says that the family members of Kavin haven’t paid back the money to any of the members who paid money in their chit fund and cheated Rs. 32,82,000 of them. The complaint was registered in Trichy economic crime division on 2007. The investigation started taking place since then.

Previous articleInsta User Made Fun Of Kavin’s Family !! Here’s How Abhirami Reacted To It !!
Next articleNot Only Fans, These Celebrities Couldn’t Keep Calm On Witnessing “VERITHANAM” Single !! Check Out !!

A youngster was found battling for his life near a dumpster in the Chengalpattu municipality having sustained heavy blood loss. The incident came to...