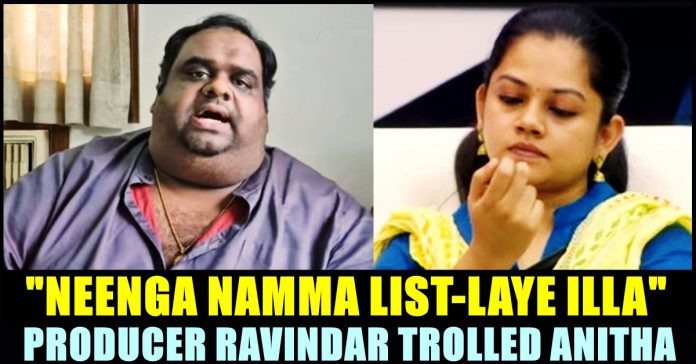 Responding to the accusation of Anitha Sampath, Producer Ravinder Chandrasekhar who reviewed the Bigg Boss show in daily basis, came up with a series of Facebook posts trolling the former news reader. Sharing the screenshot of Anitha’s Instagram story, Ravinder warned her saying that he will make himself trend in youtube if she do anything against him. He referred to the popular punch lines from Tamil films to troll the Instagram story of the Bigg Boss participant.

On Thursday, Anitha shared a screen shot of a whatsapp chat and showed her followers how a youtube channel which reviewed the show approached her for an interview. The screenshot showed a chief producer of a private youtube channel approaching Anitha for a video interview. “How Indiaglitz is able to ask this first of all” Anitha’s reply to the message read.

Sharing the screenshot, Anitha said that youtube channels are earning money by creating hatred against Bigg Boss contestants. “They are also requesting for an interview with us after the show’s end. People must understand the money mindedness behind the youtube reviews too” her story read.

Further Anitha also slammed the youtube reviewers for inviting her for interviews. “Some Youtube reviewers are celebrated like hero heroines.. they say we went to bb for fame and money.” she further said. “Are you reviewing for social service ? You are also doing it for fame, right ?? They earned more than us. Youtube channels earns lakhs and lakhs for one review video..! Including the payment they get for ads” Anitha said to her followers.

Producer Ravinder Chandrasekhar who saw this story of Anitha, came up with a series of posts in his Facebook page. Sharing the screenshot of the story, Ravinder said “This is always happening to me, even if I mind my business. She is mentioning me it seems but Indiaglitz fell in the pit.” said Ravinder through his post.

Further, he sarcastically said that he spent all the money he received from Behindwoods for reviewing the Bigg Boss show. “It is wrong to create a fuss over a show that got completed. If I get any “scratch”, I will play my “match” in entire youtube. You are not even in my list” He said to Anitha.

“I am not interested in interviewing anyone. My interviews would stream only on live. It needs some guts to face people.” said Ravinder and trolled Anitha by writing “Kochikonga Kochikonga”

In his next story, Ravinder, uploaded a post in “KGF” style. “I didn’t get the fame by reviewing 10 individuals. All the 10 individuals gained fame through my reviews” he said.

Check out the next tweet of Ravinder Chandrasekhar about Bigg Boss season one contestant Julie :

Ever since coming out of Bigg Boss house, Anitha refused to appear in the interviews being organised by private youtube channels and is interacting with her fans and followers through her official Instagram account. She is also sharing about her Bigg Boss experience through her own youtube channel “Anitha Sampath Vlogs”. Ravindar Chandrasekhar, a producer by profession, is currently making “Murungakka Chips” by having Shanthanu and Athulya in the lead roles.

Previous article“Go Back Modi” Tweet Of This Tamil Heroine Is Trending !!
Next articlePant Trending At Top In Twitter After Having A Face Off With Stokes !! WATCH

10 Tamil Films On Cards To Get Online Release !!

Kamal Haasan's vision of releasing movies directly in DTH is slowly coming into practice, we must say. The filmmaker who tried to release his...

BBC World Posted About Our Very Own Neasamani !! You Must See These Reactions !!

Nesamani has became a world icon. Yes, in one of his own movies Vadivelu would talk about becoming Obama in overnight. Now the same...