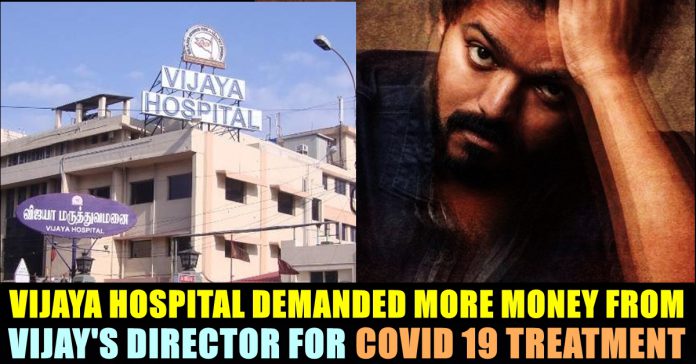 Tamizhan is a 2002 released film which had actor Vijay in the lead role. The film acted as Priyanka Chopra’s first ever onscreen appearance as female lead who went on to act in Hollywood films as heroine. It was directed by Majith who also debuted as director through this film. Now, to our shock, the filmmaker got infected by the COVID 19 virus and admitted in Vijaya hospital in Chennai.

At the time of discharge, the bill came up to Rs. 4.85 lakh which was way more than what the family of the filmmaker expected. When Majith’s wife raised question against the overcharging, the hospital management reportedly said that the amount will increase if they fail to pay it on time.

Majid’s wife who doesn’t have enough money to pay the bill, seeked help from his friends and from the cinema circle. Initially Amma creations Siva came in and provided an amount as a help from his side. Producer Kotapadi J Rajesh of KJR studios, came forward and settled the amount and helped Majith to get a proper discharge. Majith who thanked Rajesh for his timely help, stated that he got recovered from the virus.

#Majith, dir of #Thalapathy #Vijay's #Tamizhan, has thanked prod @kjr_studios #Rajesh for paying his hospital dues and getting him discharged! He underwent treatment for #Covid19 at a pvt hospital, got cured but was unable to pay bills. #Rajesh responded to his appeal for help pic.twitter.com/xLztdIfYkq

However, people in social media are questioning actor Vijay on why he didn’t come forward to help his director who gave him a break in the earlier period of his career when he needed it the most.

Recently, a sting operation of Times now media has revealed the “Cash for cure” system in private hospitals of Chennai. Videos they released showed a number of hospital authorities explaining about the different types of charges for a COVID 19 patient. A series of videos that got released by the news media portal evidently showed that the hospitals are charging Rs. 1 Lakh for 1 day of hospitalisation. (Read : Rs. 1 Lakh To 1. 25 Lakh Per Day In Chennai Private Hospitals For A COVID 19 Patient ??)

Director Majid, on the work front, made torchlight by having Sadha and Riythvika in the lead roles. The film was directed and produced by the filmmaker and failed to impress the audience as well as the critics. Rajesh is busy producing Sivakarthikeyan’s “Doctor”, Santhanam’s “Dikkilona” and Vijay Sethupathi’s Ka.Pae. Ranasingam.

Previous articleCOVID 19 Patient Died After Family Turned AC On !!
Next articleSuresh Raina Wants This South Actor To Play Lead In His Biography !!

“Ranjithame” Is A Copy Of This Vintage Tamil Song??

As soon as the most expected first single of Thalapathy Vijay's upcoming film "Varisu" got released, fans of the actor can't keep calm. They...