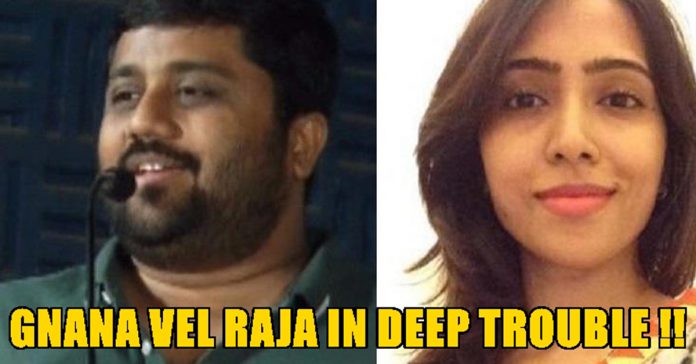 Producer Gnanavel Raja, known for bankrolling projects like Thaanaa Serndha Koottam and Singam 3, is one of the most well-known personalities in K-Town. He is also known for being vocal about the issues in the Tamil film industry.

In a series of tweets, Neha Gnanavel, Wife of Gnanavel Raja lashed female leads calling them worse than sex workers. “Some heroines are desperate home wreckers. Most of them are bed ready. They keep stalking married men. Women are the real enemies of women and they have ruining lives. Even men have been encouraging such acts and this has been spoiling the reputation of their families. Beat the bitches like a dog in public. I have the list of such heroines and will expose them soon. I have no issues with my husband but it is because of several incidents around me, I am here to share these” read the statement of Neha Gnanavel. She soon deleted all her tweets but the screenshots of her tweets are now viral all over internet.

As was only to be expected, her tweets created a furore, with several wondering if Gnanavel Raja was involved in an extramarital fling. Social media users were quick to draw a comparison to the Suchi Leaks scandal.

Let ppl do their job with ease🙏 it’s ain’t any cheap leaks!! pic.twitter.com/MryNoaKMZ6

Neha then hastily deleted her tweets and said that she wasn’t speaking of her home but those of others. She also said this was a warning to the “show women” that she’d expose them if they “ran” behind married men.

She clarified that she is not generalising, but her words apply to a few of them. Neha accused some heroines of targetting married men and called them ‘bed ready’.

The costume designer then said she has a list of such heroines and would call them out soon.