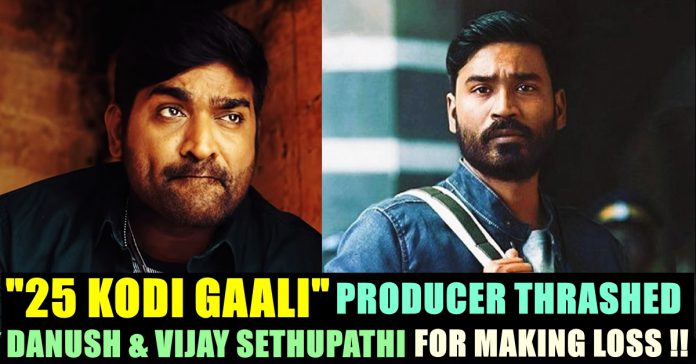 Now producer K Rajan who is known for producing various films in Tamil and Telugu film industry has made a comment on how ENPT became a disaster in box office. The producer who seems to have watched the movie in theatre criticized the film harshly for the experience he had.

In his speech he tried to explain the importance of making low budget movies to gain profits. “For past 6 months, no movies of big heroes are running successfully in theatres. Gautham Vasudev Menon’s “Thotta” (Enai Nokki Paayum Thotta) lost 25 crores just like that. Even the hero’s previous film Asuran went extremely well. But ENPT failed to do well but the director and actors of the movie didn’t face any consequences. They started working on their further projects” said Producer Rajan.

Further he revealed that Vijay Sethupathi’s recent two projects Sindhubath and Sanga tamizhan tanked at the box office. “The one who betrays the producer will not survive in the industry, no matter how much they are getting paid today.” said Rajan in his speech. Audience are very much clear in supporting films with good content.

Further he slammed actors for not spending money to their own vehicle’s diesel. “They expect producers to give salary to their assistants” Rajan said. Further he thrashed Enai Nokki Paayum Thotta for the kiss scenes and the scenes which contained Mega Akash.

“Did Kaidhi and Asuran contain such scenes. Both of them did extremely well at box office. Make good movies and earn money.” said Rajan. Earlier Rajan made headlines for commenting on the box office collection of Bigil.

“I have inquired a distributed who did distribution for Bigil in two areas. As Bigil had no competition for 2 long weeks, it received a decent footfall in theatres. But the distributor whom I inquired couldn’t pay the interest for the loan he bought. He could only managed to get the original amount with which he bought the film.” said Rajan in that interview.

What do you think on this speech of the producer ?? Comment your views below !!

Ravindra Jadeja Trolled Back A Follower Who Tried To Mock His Batting Skill !! Hilarious !!

Celebrities from all over the world are subject to online trolling on a daily basis. While ignorance is bliss, Ravindra Jadeja recently confronted a...