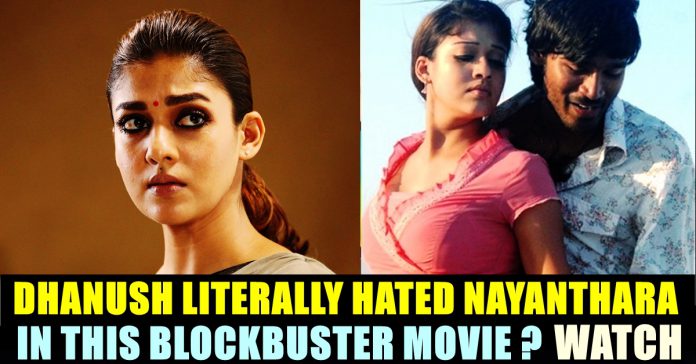 “Naanum Rowdy Thaan”, a 2015 Tamil film that had Vijay Sethupathi and Nayanthara in the lead roles. Directed by Vignesh Shivan, the film was bank rolled by Wunderbar films of actor Dhanush. The film became a commercial hit during its release time and acted as a huge break for both Vijay Sethupathi and Nayanthara. The film was widely loved by the audience but reports suggests that Producer Dhanush totally disliked the performance of actress Nayanthara.

Be it her acting skills or screen presence, Nayanthara is one of a kind in Tamil film industry, comparing to all the other heroines. In a world which is dominated by male protagonists, unlike other heroines, Nayanthara excels in female oriented subjects as well.

She who is fondly called as “Lady Superstar” by her fans, proved herself as one of the brilliant actresses in Indian cinema right now by choosing scripts such as Aramm, Kolamavu Kokila, Imaikkaa Nodigal etc. At the age of 35, we could even declare that no actress in Tamil cinema history has paired up with top-tier actors such as Rajinikanth, Vijay, Ajith like Nayanthara did and it is hard to replace her.

However, on seeing her performance in “Naanum Rowdy Thaan”, Dhanush reportedly hated her performance. The actress herself disclosed about it after receiving an award for acting in the film in the year 2016. Nayanthara, after thanking Dhanush, said that she will improve her acting skills in the future.

Dhanush and Nayanthara acted together in the romantic comedy film “Yaaradi nee mohini”. The actress also made an appearance in the former’s production venture “Ethir neechal” as a guest dancer. A rumour is doing rounds in social media that Dhanush disliked the final output of “Naanum Rowdy Thaan” and expressed his disappointment. The buzz also says that the actor blocked Vignesh shivan in Twitter after producing the film.

On the work front, Nayanthara is expected to be seen in “Nettri Kann” of Miland Rao and in “Nizhal”, a Malayalam film. She was last seen in Rajinikanth’s “Darbar” and Vijay’s “Bigil”.

Previous articleWarner’s Action On Bed After Four Months Caused The Injury ?? Candy Warner Opens
Next articleSanjay’s Tweet About Jadeja Getting Attacked From All The Directions !!

As soon as seeing the clarification video released by actress Sai Pallavi regarding the recent controversy she got caught, actress sum politician Gayathri Raguramm...