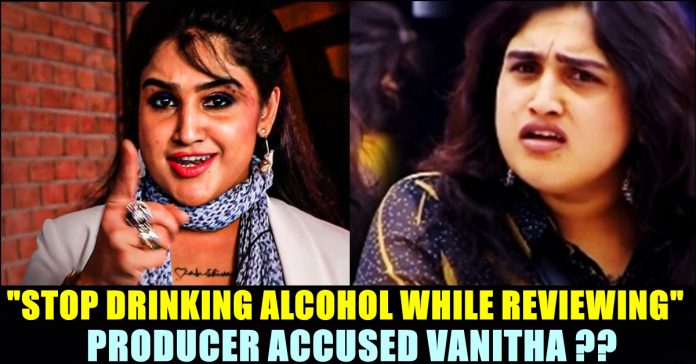 Currently, she is involved in analyzing the fourth season of the Bigg Boss show. The actress who caught into a number of controversies after participating in the show, is now busy making contents for her youtube channel through which she is providing cooking tips to her 6 lakh plus followers. She is also collaborating with a private youtube channel named as “Galatta” and reviewing the ongoing Bigg Boss show.

Here’s one of the recent opinions of the actress regarding the show’s contestant Balaji Murugadoss :

Unable to see few halfcooked reviews about bb4…ex contestants are doing can relate and agreed as they know exactly what happens there in #biggbosstamilseason4 ..ppl who have no clue and no guts to go there have no rights to talk..they are giving false info..@vijaytelevision

Producer Ravinder Chandrasekar who is currently bankrolling a number of projects including Shanthanu’s “Murungaka chips”, is also reviewing the ongoing Bigg Boss show in Behindwoods youtube channel. Earlier, Ravinder Chandrasekhar and Vanitha Vijayakumar confronted each other over an issue regarding the latter’s alleged marriage with a man named as Peter Paul. Claiming to be a supporter of Elizabeth Helen, Peter Paul’s first wife, Ravinder became a subject to Vanitha’s wrath.

Now, in a recent review video, Ravinder took an indirect dig at Vanitha for her statement about people who have no experience of living inside the Bigg Boss house reviewing the show. Countering her statement, Ravinder accused Vanitha of consuming alcohol before giving review for the Bigg Boss episodes. “No matter if one has the eligibility to review the show or not, it will be fair if they avoid consuming alcohol while reviewing it” he said in the video.

“I kindly request them to review the show without consuming the alcohol” he added.

Watch the video below from 40th minute :

Through her Bigg Boss stint, Vanitha gained a separate fan following for the way she handled the issues that took place in the Bigg Boss house between the other participants. She received an award for her “Guts and Grit” by Kamal Haasan. She is the only contestant in Tamil Bigg Boss history who got eliminated and made a come back within days as a participant.

Previous articleThird Promo Of Bigg Boss Show Delayed Because Of This Reason ??
Next articleFans Got Upset On Seeing This Video Of Kohli Sledging Manish Pandey !! WATCH