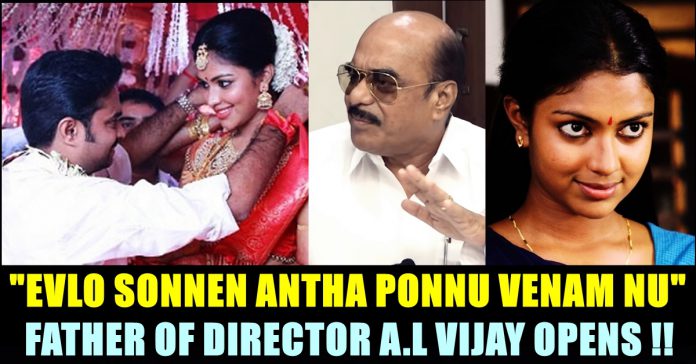 Director A.L Vijay who rose to fame in Tamil film industry through his historical period drama “Madrasapattinam”, is one of the leading filmmakers in Kollywood. He directed some of the leading actors of Kollywood such as Vikram, Vijay and became a familiar face among the fans of Tamil cinema.

A.L Vijay married actress Amala Paul in the year 2014 with whom he worked in films like Deiva Thirumagal, Thalaiva etc. However, After two years of marriage life, the couple decided to separate and got divorced in the year 2017. Since the separation, both of them became very much busy in their respective fields.

Now, father A.L Vijay, producer A.L Alagappan has stated why he accepted for their marriage in an interaction with experienced filmmaker Chithra Lakshmanan. After making films and serving as President of Tamil Nadu Producers Council, A.L Alagappan has made a career appearing in supporting roles in films. He got nominated for several awards for his negative role in M. Sasikumar’s Easan.

When Chithra Lakshmanan asked Alagappan on how he allowed his son to marry an actress as he restricted them to enter cinema industry earlier, Alagappan said that he couldn’t anything about it as Vijay was adamant. “I denied him permission several times and struggled a lot to restrict him from marrying her. It is a tragedy” said Alagappan about the marriage of A.L Vijay and Amala Paul.

“It is nothing about marrying a girl from cinema industry. I have treated actresses who worked with us like sister. We can’t blame a woman blindly. What worried me the most is the characters of Vijay and Amala Paul won’t work for a marriage life. We have heard a lot about her. But we didn’t accuse her blindly but I kept insisting Vijay that it won’t work” said Alagappan in the interaction with Chithra.

“I couldn’t do anything about it as he was so adamant about his marriage. Before marriage she gave her word to me about converting her religion. We are Lord Shiva’s devotees and she belongs to christianity. She accepted to convert her religion. Then I asked her not to act in movies after marriage. She accepted to both and conducted marriage in a church about which I couldn’t do anything. I couldn’t stop at the last minute. Then he (A.L Vijay) realized himself and got divorce from her” said the producer who added that Vijay is now happy with his second marriage life.

Now director Vijay is busy in making the biography of former chief minister J Jayalalitha. Amala Paul was last seen in “Aadai” and is gearing up for her next release “Atho Antha Paravai Pola”. What do you think on these statements from A.L Alagappan ? Comment your views below !!

Previous articleFollower Criticized Amy Jackson For Her Instagram Post !! Check Her Reply
Next articleHere’s Why Distributors Are Trying To Meet Superstar Rajinikanth !!