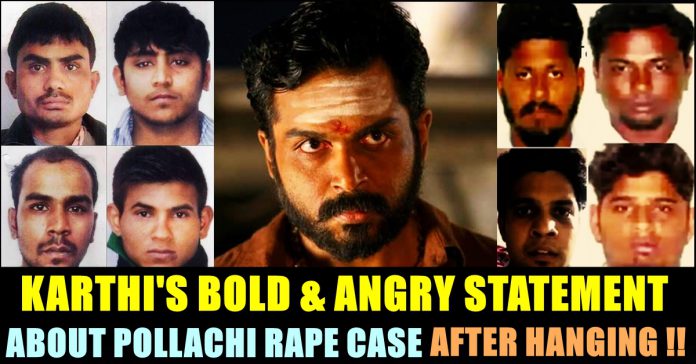 On the day, the rapists of Nirbhaya case got hanged, many people expressed their thoughts and opinions. Few of them regretted the way Pollachi rape case is being handled by the law. Now, actor Karthi who is known for acting in films like Paruthiveeran, Paiyaa, Kaithi happens to be the only Tamil actor to talk about it loudly.

This is the first time that four men have been hanged together in Tihar Jail, South Asia’s largest prison complex that houses more than 16,000 inmates. Reacting to this news, Karthi expressed his sigh of relief by saying that the justice finally served after 8 long years. In his tweet, Karthi wondered how long it will take to find justice in Pollachi case. He hoped that people don’t forget the lesson they learnt from that horrific sexual harassment case.

“Finally justice for Nirbhaya after 8 years. Wondering how long it will take for the Pollachi case to find justice. It’s been a year already. Hope we don’t forget the lessons we learnt from it! Always stay safe.” read the tweet of the actor who has more than 13 lakh followers in Twitter.

Finally justice for Nirbhaya after 8 years. Wondering how long it will take for the Pollachi case to find justice. It’s been a year already. Hope we don’t forget the lessons we learnt from it!
Always stay safe. #NirbhayaCase

Pollachi rape case which shook the entire state few months ago involves gang members who used to befriend women on social media websites luring them to meet and then forcefully shooting their obscene videos. This incident created massive outrage in the state Tamilnadu where many started protesting in order to get the culprits what they deserve. Apart from the public who are very much angry on the rapists, many cinema celebrities also raised their voice for the victims at that time.

This tweet of Karthi considered as need of the hour by his followers. Check out some of the reactions below :

All Pollachi accused are out on bail. Justice in Pollachi is not possible as most of people involved are bigshots.

Pollachi case involves many mystery. The complete web must be taken off and punished.

Thanks for voicing out