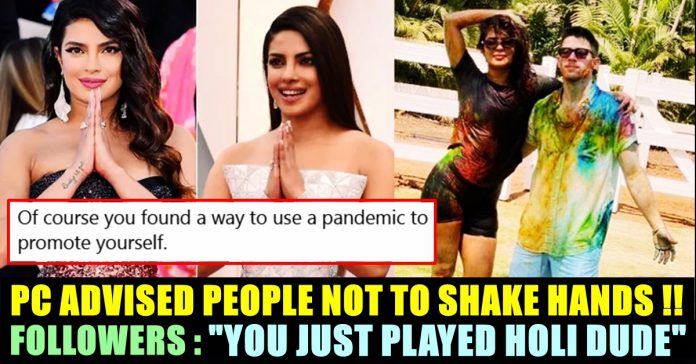 Actress Priyanka Chopra’s post regarding the awareness of Coronavirus went completely wrong as people accusing her for seeking publicity through that. The “Thamizhan” actress who enjoys more than 2 crore followers in Twitter posted a compilation video in which she can be seen greeting cameras with folded hands in various events. She posted the video, in a way of suggesting people not to shake hands as Coronavirus is spreading across the world.

“It’s all about Namaste. an old but new way to greet people in a time of change around the world. Please stay safe everyone!” the actress wrote as a caption. Here’s her post :

It’s all about Namaste 🙏🏻 an old but new way to greet people in a time of change around the world. Please stay safe everyone! pic.twitter.com/fqk12QbD7K

The effect of Coronavirus across the globe is threatening as the death poll is raising in daily manner. In India, many cases in different states were reported and the remedies are being taken against the deadly virus. The lethal disease has killed more than 3000 people in China and has spread to over 20 countries across the world. 13 people died in last 24 hours and 11 news cases reported, according to reports. The most shocking news about it is, that there were few cases reported in Tamilnadu as well. However, Tamilnadu’s health minister Dr.Vijayabaskar has posted a series of tweets to make sure people of Tamilnadu not to panic.

Though, the deadly disease is spreading widely, the post of Priyanka became a subject to trolling. Many of them said that the actress is doing it to gain fame. A journalist named as Sandhya trolled Priyanka by saying that she just played “Holi”. Check out some of their reactions below :

I hate to say this to a successful, smart woman but stop milking everything.

We have already been living in color over the past few days. Literally. Nick’s first Holi was made so special being home. May everyone celebrating have a very happy and safe Holi.

Could she be more cringe?

The post was the excuse to put up the slideshow

u should’ve kept this in your drafts 😪😂 https://t.co/MGYLm5pB0q

Can't believe you were Miss World. Bragging about a cultural practice at times of serious global health crisis. 🤮

WHAT IS GOING ON IN YOUR HEAD https://t.co/pIVkC0jJpL

This bitch is so dumb https://t.co/KQ4aIaUiAc

Not only Priyanka, many other Indian and foreign icons suggesting others to follow Indian custom of greeting with Indian custom “Namaste”

Président Macron has decided to greet all his counterparts with a namaste, a graceful gesture that he has retained from his India visit in 2018 pic.twitter.com/OksoKjW7V8

In a recent speech she delivered for the Chennai literary festival 2023 that took place at Anna Centenary library, DMK's MP Kanimozhi criticized Sivakarthikeyan's...