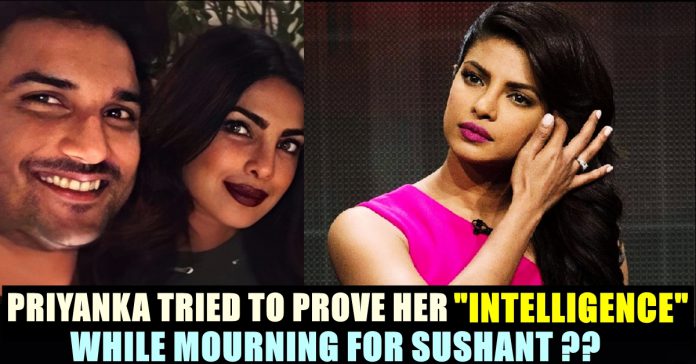 Among enormous number of Indian cinema celebrities, Priyanka Chopra who is a well known across the country for her acting stint also expressed her condolence by uploading a selfie picture of herself with Sushant Singh Rajput. However, her tweet didn’t go well with her followers as they started blaming the actress by accusing her for trying to prove her “intelligence” even while mourning for the demise for the young charm.

Priyanka Chopra, earlier got criticized for raising her voice in support of “Blacks” in the George Floyd incident instead of supporting for the issues that are taking place in her own country. At the time, many of her followers criticized her by saying that she is doing that to gain popularity in Hollywood film industry where she did a number projects. Read : Priyanka Chopra Facing Severe Criticism For Her Post About George Floyd !!

Now, in her condolence tweet, Priyanka remembered her conversations with Sushant Singh Rajput about “Astrophysics”. “I’m stunned. U must have been in so much pain. I hope u are at peace wherever u are my friend. Gone too soon.I’ll never forget our conversations about astrophysics at sunrise.Words cease to make sense. RIP Sushant. My condolences to the family & everyone grieving this huge loss” her tweet read.

I'm stunned. U must have been in so much pain. I hope u are at peace wherever u are my friend. Gone too soon.I’ll never forget our conversations about astrophysics at sunrise.Words cease to make sense. RIP Sushant. My condolences to the family & everyone grieving this huge loss💔 pic.twitter.com/tA5CmNsRJC

Many of Priyanka’s own followers slammed her for bringing about her knowledge about “Astrophysics” here. Astrophysics is a branch of space science that applies the laws of physics and chemistry to explain the birth, life and death of stars, planets, galaxies, nebulae and other objects in the universe. Check out some their reactions below :

“Our conversations about astrophysics at sunrise”. I am amazed at people’s ability of making someone’s death about themselves. https://t.co/LI9KDlAxLu

‘Our conversations About astrophysics at sunrise’!! Even in this moment you have to plug in your own ‘intelligence’!! Pri – dont let Hollywood’s superficiality change you pls! ☝️

Lol trying to show off that she understands astrophysics

It is widely believed that Sushant was not received a warm welcome from Bollywood film industry for various reasons including his Television background. A hashtag “Nepotism in Bollywood” is trending in Twitter, followed by the actor’s demise. Read : Bollywood Industry Let Sushant Down ?? Celebrity Opened. Sushant Singh Rajput was found hanging in his Bandra home earlier this morning. Some of his friends were present at the spot when the body was discovered. The house door was broken and he was found broken. Some of the initial reports has said that the depression is the main reason behind his death and his friends said that he was seen depressed for past six months which could be the main reason for this extreme step. A suicide note has not been found yet. Comment your views on this tweet posted by Priyanka Chopra and the reactions she received !!

Previous articlePeople Criticizing TN Govt. For Their Earlier Announcement !!
Next articleKangana Ranaut Just Revealed The Cause Of Sushant’s Demise ?? WATCH

In one of the recent interviews, India's leading spinner Ashwin expressed his displeasure over a statement made by then coach Ravi Shastri after the...

Tamil nadu's Information and Publicity Minister Kadambur Raju has stated that the speech of Edappadi K Pazhaniswamy on the final day of assembly meeting...