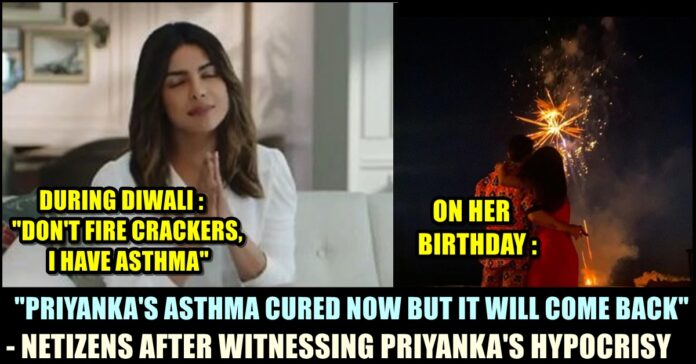 Actress Priyanka Chopra who is known for her stint in Bollywood and Hollywood films, is in the receiving end after one of the pictures shared by her husband Nick Jonas showed herself enjoying crackers bursting in the sky along with her husband. People shared the picture and asked if the actress got cured from her Asthma as she discouraged people not to fire crackers during Diwali as it affects people (including her) with respiratory problem. 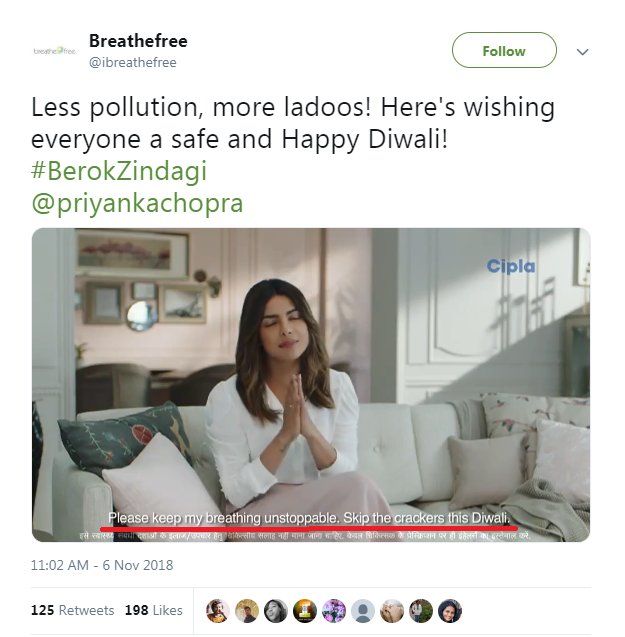 On 18th of July, Priyanka Chopra celebrated her 40th birthday with her husband Nick Jonas. Sharing a series of pictures that showed them spending the special day happily, Nick Jonas wrote “Happiest Birthday to my ♥️ the jewel of July. So honoured to be on this crazy ride called life with you. I love you” as his caption.

Fourth picture of the post showed Priyanka and Nick hugging each other and enjoying the scene of crackers bursting at the sky. The particular picture grabbed the attention of online users who were quick to make remarks about the “Asthma” disease Priyanka was suffering from.

Earlier, in an attempt to discourage people from bursting crackers during Diwali festival and raising awareness about the raise of chest infections and respiratory diseases caused a spike in air pollution, the actress pleaded people to celebrate the function with love not pollution. 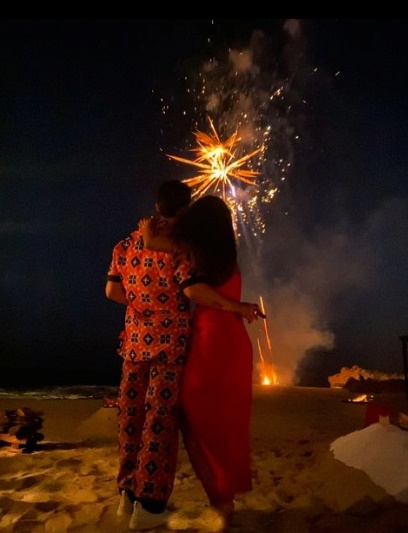 In a video which was posted online, the actress was heard saying “Please spare my lungs and skip crackers this Diwali”

In another instance, while supporting an ad campaign to promote medical aid, Priyanka spoke up about her battle with respiratory disease since she was a little child. “Those who know me well know that I’m asthmatic. I mean what’s to hide?  I knew I need to control my asthma before it controlled me. As long as I have got my inhaler, Asthma can’t stop me from achieving my goals” Priyanka said on Twitter. However, the actress caught in controversy and became a subject severe online troll after a picture of herself smoking cigarette went viral in social media platforms.

Now, after seeing the picture of Priyanka happily enjoying crackers bursting at the sky, online users started questioning the actress whether her Asthma got cured or it will occur only during the season of Diwali festival.

Priyanka Chopra’s asthma is fine now but it will come back at the time of Deepawali. pic.twitter.com/FrZs9U6Gex

Now she doesn’t t have Asthma which comes up only during Hindu Festival Deepavali..

Hypocrisy at its best. Fireworks to bring in Priyanka Chopra’s bday @priyankachopra pic.twitter.com/p0tufjzs6z

Priyanka Chopra’s asthma is cured now it would seem. Fireworks are ok now
It surfaces at Diwali time only 🤔
pic.twitter.com/cMvZiGACjO

Priyanka has issues with Fireworks…she is suffering with Asthma problm

So please take care of her

Priyanka Chopra curing Asthma she got during Diwali pic.twitter.com/CuwQ4azF9n

Priyanka Chopra’s asthma is fine now but it will come back at the time of Deepawali.@priyankachopra @nickjonas pic.twitter.com/Pgkg8KrYwX

Now she doesn’t t have Asthma which comes up only during Hindu Festival Deepavali..

Hypocrisy at its best. Fireworks to bring in Priyanka Chopra’s bday pic.twitter.com/zxq99dZkRz

People with asthama smoke too. Don’t believe me? 😉 pic.twitter.com/GTBzo5X4xR