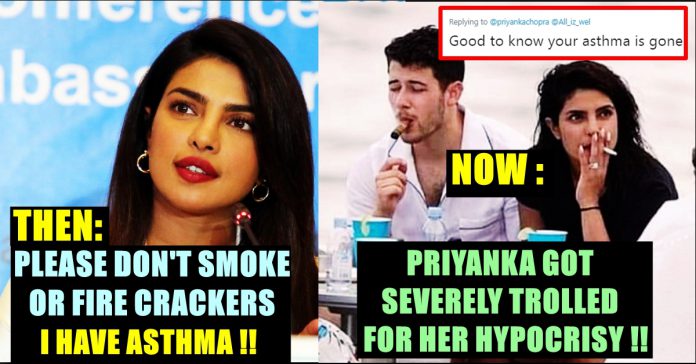 Priyanka has been in Miami chilling with her mom, Madhu Chopra and beau Nick Jonas. She rang in her birthday with a four-tier cake and a fabulous party that also saw Parineeti Chopra and Anjula Acharia. But apart from her birthday bash and pictures from her yacht party, it’s this one snap of Priyanka smoking a cigarette with Nick and her mom smoking a cigar that has gone viral.

This picture became a troll material not because of smoking but because of Priyanka Chopra who said that she is an asthma patient last year. The trolling began when netizens associated her ‘smoking picture’ with her previous statements on suffering from asthma and asking her fans not to smoke.

Several users also dug out an old video in which Priyanka campaigned for a cracker-free Diwali. Some even criticised the actress for celebrating her birthday amidst the devastating Assam floods – Priyanka Chopra was appointed the brand ambassador of Assam tourism in 2016.

Check out some of the trolls here :

1. Me in front of my parents.
2. Me with friends.#PriyankaChopra pic.twitter.com/FoxkSnkXDC

Now this cigarette won’t affect you and the firecrackers didn’t harm to anyone pic.twitter.com/ZYYm8eRuaO

Which one is Real and Fake ?
Pic 1 or Pic 2 #PriyankaChopra is there any hypocrisy. pic.twitter.com/pw6EsVffAm

Thanks to Priyanka Chopra.

Being a Asthma patient she aware everyone to stay away from smoke!
Now she’s smoking cigarette!

I truly believe that is not#PriyankaChopra hypocrisy. Maybe media science develop a cigarette which can heal asthma patients without side effects!

Good to know your asthma is gone

In December last year, Priyanka Chopra was criticised for letting off crackers at her own wedding. Meanwhile, Priyanka has been at the receiving end of brutal social media commentary several times in the past – in 2017, Priyanka Chopra was wardrobe-shamed for wearing a short dress when she met Prime Minister Narendra Modi in Berlin. Her outfit in a recent gala event also subjected to severe trolling in online media.

Previous articleThis England Cricketer Laughed At Dhoni’s Decision !! GOT SEVERELY TROLLED !!
Next articleEXCLUSIVE : Why Losliya Is Very Much Attached To Cheran ?? Here’s The Reason !!

Actor Nakkhul came up with a video in his official Instagram account to clear the air on his participation in the upcoming season of...