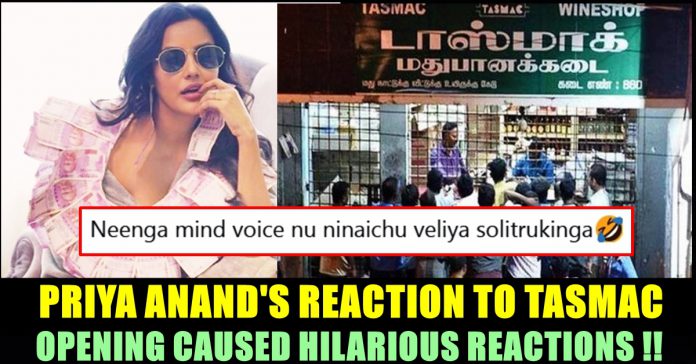 Tamil actress Priya Anand’s reaction to the government’s decision on TASMAC reopening caused hilarious trolls and comments from her fans and social media users. The actress, while replying to a picture of herself laughing, said that it is her reaction for the opening of TASMAC. The tweet of her garnered huge reception from the users of Twitter with many posting hilarious comments to troll the actress.

On Friday, Tamil nadu chief minister MK Stalin announced that the lockdown will be extended till 21 of June with few relaxations. It included the opening of Tasmac shops from 14th of June between 10 AM and 5 PM. The decision from the newly formed government has received flak from the users of social media platforms, mainly from the members and followers of BJP party. Common people are also expressing their opinions regarding the opening of Tasmac amidst the pandemic situation.

Meanwhile, actress Priya Anand who is currently involved in promoting her single “Dream mein Entry”, has been sharing tweets regarding it and replying to fans who are appreciating her looks and performance in the promotional videos. Promoting the song which released on 11th of June, Priya wrote “Looking forward to the 11th of June! ❤️ DreamMeinEntry #GirlsNightOut” through one of her recent Instagram post.

A follower of the actress, uploaded a picture of Priya laughing and said “A Single Music Video from her and its trending, forgot how cute she is. We need more #PriyaAnand content.” to express his love towards her.

A Single Music Video from her and its trending,
forgot how cute she is 😭💖.
We need more #PriyaAnand content. pic.twitter.com/TVm5NYV22f

Overwhelmed by the post, the “Vamanan” actress said that it her reaction to the reopening of Tasmac. “Me when they announced that the Tasmacs are opening”

Me when they announced that the Tasmacs are opening 🙈🥺🙄🤦🏻‍♀️ https://t.co/Ish7xPkSKX

Trolls emerged on seeing this reply from her. Many said that the actress had spoke her mind voice out and one of them went on to ask “Ur favourite brand and spot??”

Ur favourite brand and spot?? 😁 https://t.co/MXjSss67JW

Priya Anand who rose to fame among Tamil audience after acting in Tamil films “Vaamanan”, “Ethir Neechal”, “Vanakkam Chennai” is enjoing a huge fan base in social media platforms. She is pretty much interactive with her followers in the photo/video posting social media platforms. On the work front, the actress who was last seen in the remake of Telugu blockbuster “Arjun Reddy”, is expected to be seen in “Mirchi” Shiva’s “Sumo, a Kannada film named “James”, “RDX” and in “Anthagan”, remake of Hindi blockbuster “Andhadhun”.

Previous articleGayathri, Madhuvanthi & Many Others Condemned TN Government For Allowing TASMAC To Function !!
Next article“I’m Going To File A Complaint Against Him” – Chinmayi After Facing Mental Harassment In Club House

Young and emerging actress Yashika replied to a dirty question of one of her followers in a savage manner. To the one who asked...