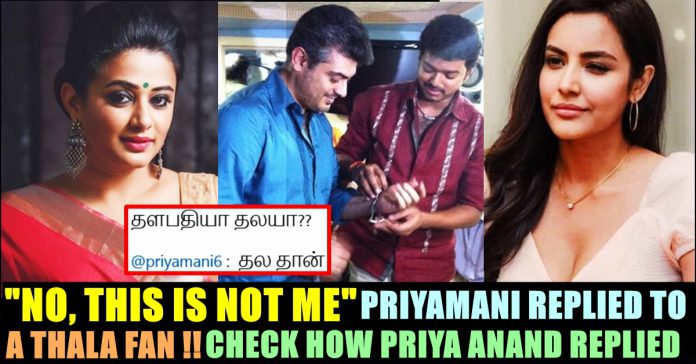 Fans of both these actors are always interested in showing their favourite star’s power by publishing videos of other celebrities praising them. For instance if legendary actors like Rajinikanth or Kamal Haasan praise Ajith or Vijay in a function, fans of them would get excited and would spread the video as much as possible till it goes viral.

In a same way, now fan of actor Ajith has proudly posted a video of actress Priya Anand saying that Thala Ajith is her favourite hero. However, instead of tagging Priya Anand, Ajith’s fan tagged actress Priyamani who won national award for her acting in “Paruthiveeran” movie.

On seeing this blunder, Priyamani immediately replied to it by writing “This is not me!!!, Wrong tag”

However, Priya Anand cleared the air by writing “😅 meeee” which made Priyamani laugh. Check out their replies here :

Priyamani was last seen in a Tamil film named as “Chaaru Latha” in which she played double action. Since then she was not active in Tamil film industry and started concentrating in Telugu and Kannada films. Priya Anand on the other hand is awaiting for the release of “Adhithya Varma” and was last seen in RJ Balaji’s “LKG” as female lead.

As far as fan war in Twitter is concerned, both the actors are uniquely talented and are being praised for their respective skills by celebrities. Ajith who is known for his screen presence and has set the screen on fire on several occasions while making his entry in his films. Meanwhile Actor Vijay known for his exceptional dancing skill.

Previous articleFan Couldn’t Believe The Final Result Of Super Singer !! Check How Judge Replied To Him !!
Next articleVijay Gifted His BIGIL “Jersey” To This Co-Actor !! Check Who !!

Actress Kasthuri who is expressing her political and social views through her official twitter account for quite a few years, recently posted a...