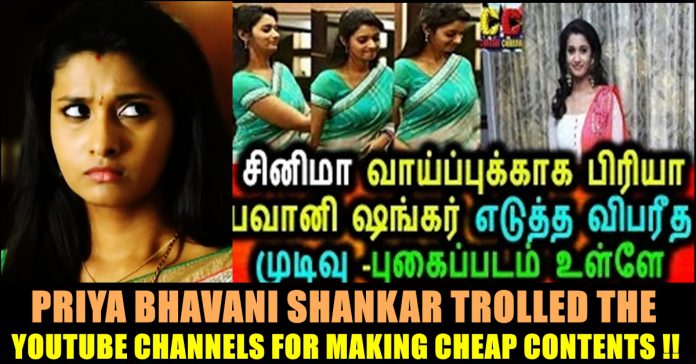 Priya Bhavani Shankar trolled the regressive titles and thumbnails of small time youtube channels while replying to one of her Instagram followers. We have seen youtube channels making derogatory claims about heroines and top-tier actors to grab more views for their videos. Now, the “Meyadha Maan” actress who seems to be aware of such videos which were made targeting her, acknowledged her follower who trolled such channels in one of her recent Instagram posts.

Priya Bhavani Shankar made her entry into media industry as a Television News presenter in Tamil Puthiya Thalaimurai News Channel. She became very popular after started acting in serial named “Kalyanam Mudhal Kadhal Varai” which got telecasted in Star Vijay Television. She began her career as a software engineer at Infosys, after her Bachelor’s Degree in Electronics and Instrumentation Engineering from B.S. Abdur Rahman Crescent Institute of Science and Technology. After entering the media industry she did her Master of Business Administration.

The actress who gained many fan pages in social media platforms in a very short span, has a separate set of fan following for her acting and screen presence. So far she paired up with Vaibhav, Karthi, SJ Surya and Arun vijay. She is committed in Indian 2, Oh Manapenne, Kuruthi aattam, Bommai, Kasada Thabara and Kalathil Santhippom.

The actress is pretty much active in social media platforms with enormous number of followers. Most recently, Priya who is pretty much interactive with her followers in Instagram, uploaded a post with three pictures by striking stylish poses. “Paint the world and make it yours ❤️” her caption for the post read.

This post of the 30 year old actress garnered wide reach. With hundreds of comments, Priya received nearly 2 lakhs likes for her post. Meanwhile, one of a follower of the actress named Rahul posted a comment trolling the youtube channels for the contents they are making using the pictures of Priya.

He said that a bit of Priya’s upper shoulder has been exposed in the picture and now youtube channels will start making videos saying that Priya started doing glamorous photoshoots for movie opportunities and for money. “Lighta upper shoulder thereyuthu poochu 😂 youtubela start panniruvanga . PBS glamourous for movie chance & money” his comment read.

Priya who saw this comment of Rahul, immediately acknowledged it by replying “some comments has my heart and this is one😂”

The way she responded to the comment makes us realize how much the actress had went through while seeing such videos and titles in youtube. Not only Priya, many other heroines expressed their frustration over such regressive videos. Would they stop after seeing this reply of her ?? Comment your views !!

In a public club house room, a man named "Kishore" confessed that he had "raped" a woman after threatening her while hundreds of people...